COLOMBO (AFP) - Sri Lankan authorities failed to arrest the Islamic militant who led the Easter Sunday attacks that killed 258 people despite mounting evidence against him, the country's top intelligence official said on Wednesday (May 29).

Mr Sisira Mendis told a parliamentary probe into security lapses leading to the April 21 suicide bombings that the attacks led by Zaharan Hashim could have been avoided if he had been detained.

"He was reported for hate speech. He had come to the attention of the authorities before the attacks," said Mr Mendis, who is the chief of national intelligence.

"Police could have at least detained him for questioning when there were these reports against him."

Official sources said Hashim came to the attention of the authorities following a violent clash with a moderate Muslim group in his village in eastern Sri Lanka two years ago. However, he was not arrested. 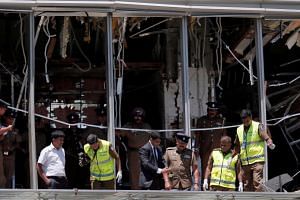 Ten days prior to the attacks, Sri Lanka's police chief Pujith Jayasundara had issued a warning that Hashim's National Thowheeth Jama'ath (NTJ) could target churches and other places.

But this was not followed up and no security plan was put in place as a result of further intelligence received from neighbouring India which had questioned a militant in its custody, according to official sources.

The government has admitted failing to prevent the attacks that also killed 45 foreign nationals and wounded nearly 500 people in the worst act of violence in Sri Lanka since its civil war ended.

Sri Lanka has been under a state of emergency since the attacks, but Mr Sirisena announced on Monday that he will allow the tough laws to lapse within a month because the security situation was "99 per cent back to normal".

The mainly Buddhist nation of 21 million people was about to mark a decade since the end of a 37-year-long Tamil separatist war when the Islamic extremists struck.