ISLAMABAD (AFP) - At least 306 people are known to have died after a massive quake on Monday (Oct 27) hit Afghanistan and Pakistan, with the toll expected to rise as rescuers reach remote mountainous areas.

Monday’s quake was centred near Jurm in northeast Afghanistan, 250km from the capital Kabul and at a depth of 213.5km, the US Geological Survey said. The tremor, which lasted at least one minute, shook buildings in Afghanistan, Pakistan and India, sending thousands of frightened people rushing into the streets.

Below is a list of some of the world's strongest earthquakes in the past 30 years.

- April 25, 2015: A 7.8 magnitude quake in Nepal kills almost 8,900 people and destroys about half a million homes. A massive aftershock with a magnitude of 7.3 follows in May, killing dozens more.

- March 11, 2011: Nearly 18,900 are killed when a tsunami triggered by a massive magnitude 9.0 undersea quake slams into the north-east coast of Japan, triggering a nuclear crisis at the Fukushima Daiichi atomic plant. 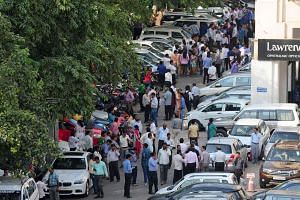 - Feb 27, 2010: An 8.8 magnitude earthquake rocks the coast of Chile, causing a massive blackout affecting many parts of the country and triggering tsunami warnings as far away as San Diego and Japan. Five hundred and twenty-five people were killed, and 25 others went missing.

- October 2005: An earthquake of 7.6 kills more than 75,000 people, the vast majority of them in Pakistan's North West Frontier Province and the Pakistani-administered zone of Kashmir state. Some 3.5 million are displaced.

- Dec 26, 2004: A massive undersea earthquake off the coast of Sumatra island triggers a tsunami which kills 220,000 in countries around the Indian Ocean, including 168,000 in Indonesia.

- August 1988: A magnitude 6.8 quake hits eastern Nepal, killing 721 people in Nepal and at least 277 in the neighbouring Indian state of Bihar.