At a slum hidden behind gleaming high-rise glass buildings in the Indian city of Gurugram, residents said they would try the unheard-of practice of social distancing.

"Of course, among the family, social distancing is difficult. We live in a small hut. But we are trying to maintain it (distance) outside," said Mr Anwar Hussain, 24, a scrap dealer. "But it is not easy. Our houses are so close together."

Just behind him, half a dozen people remain in close proximity, milling around freshly-filled blue vats of water, the first supply in four days.

More than 500 people in this slum, who are mostly from the north-eastern state of Assam, are trying to comply with a three-week lockdown - ending on April 14 - announced by Prime Minister Narendra Modi. He has urged Indians to "increase social distance and decrease emotional distance" to break the chain of transmission of the coronavirus.

Middle-class and upper-class Indians across densely populated cities have quarantined themselves at home with adequate provisions. But for the poor, the lockdown is not so easy.

Over 65 million Indians live in urban slums spread across multiple cities. In many slums, people have to come out of their homes for basics like water and the use communal toilets.

According to the 2011 census, 26 per cent of slum dwellers have to fetch drinking water. Around 11.4 per cent have to go more than 100m from their homes for it.

At Ms Saleha Khatoum's house, six people live in a single-room hut. Even washing hands is a luxury now.

Many drivers of water tankers have returned to their villages, disrupting supplies. And when they finally come back, the 29-year-old Ms Khatoum have to jostle with others to fill her buckets.

"Water comes once in four days. Earlier, we were getting water every day. So do we wash hands or drink water?" she wondered, cradling her three-year-old son in her 250 sq ft, one-room dwelling.

India is seen to have taken measures early on when there were only around 300 cases. In spite of a population of 1.35 billion, the country has not had the massive jumps in infections seen in countries like Italy. 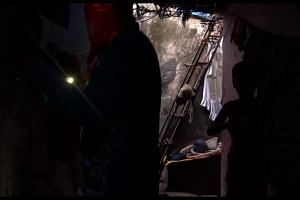 Still, one of the key worries for state and federal governments is the threat of the highly contagious infection racing through the slums of India. There are fears that they could become hot spots, putting the healthcare system under tremendous pressure.

The death from Covid-19 of a 56-year-old resident of Dharavi, Asia's biggest slum, in India's financial capital Mumbai, has triggered alarm. Four more people have been found to be positive.

"In a slum, it will spread, no matter what. And social distancing is the whole point of the lockdown. But in slums there is intermingling of population and there is no distance even at home," said social activist Nikhil Dey.

The lockdown has been chaotic for the poor in particular. The first few days triggered a massive humanitarian crisis when hundreds of thousands of migrant workers, unable to earn a living, left their slums and made a last-minute dash on foot for home, hundreds of kilometres away.

While some succeeded, others were rounded up and taken to shelters or persuaded to go back to their slum dwellings with promises of food. However, while the government has announced a 1.7 trillion-rupee (S$32 billion) economic package for the poor, that is seen to be not enough.

Many slums now depend on food supplied by non-profit organisations and individuals, as well as the government. At Sitti colony, food worries receded after a community centre opened up, but many are already thinking ahead. "If after the lockdown, the situation doesn't improve, we will have to think of going back to Assam," said Mr Shaukat Hussain, a rag picker.