NEW DELHI (BLOOMBERG) - The powerful president of India's ruling party has encouraged his organisation's social media volunteers to spread viral messages supporting the government ahead of next year's election, and even seemed to praise fake news that worked in their favour.

"We are capable of delivering any message we want to the public, whether sweet or sour, true or fake," said Mr Amit Shah, the head of Prime Minister Narendra Modi's Bharatiya Janata Party, at a rally for social media volunteers in the Indian state of Rajasthan on Sept 22.

In India, where smartphones have proliferated but digital literacy remains low, fake news and viral social media posts have proved deadly in the past.

Over the last year, Indian police have linked numerous mob lynching attacks across the country to fake messages spread over the WhatsApp messaging service.

In Mr Shah's comments, which were posted on the BJP's YouTube channel and reported by India's The Wire, he spoke approvingly of one "smart" social media volunteer who spread a fake rumour over WhatsApp during a state election in 2017.

Mr Shah said the BJP social media team had helped spread a volunteer's false message that a rival - the state's then chief minister - had slapped his politician father in the face. The fake message went viral. 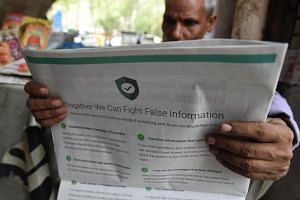 "One should not do such things, but in a way he created a certain perception," Mr Shah told the crowd.

"This is something worth doing, but don't do it," he added, prompting the audience to burst into laughter.

"Do you understand what I am saying? This is something worth doing, but don't do it!"

Mr G.V.L. Narasimha Rao, a spokesman for the BJP, referred questions about Mr Shah's comments to the party's head of information technology, Mr Amit Malviya, who declined to comment.

A prime minister's office spokesman did not respond to calls or texts seeking comment.

In a previous meeting with party faithful, Mr Shah had told social media volunteers to avoid posting fake news because it would endanger the BJP's credibility, according to a Times of India report.

India's Election Commission has also expressed concern about "fake news and paid news" ahead of the elections.