NEW DELHI - Finance Minister Heng Swee Keat said a third review of a key bilateral pact between Singapore and India would open up "new areas of cooperation in trade and investment" between the two countries.

The Comprehensive Economic Cooperation Agreement (CECA), which was signed in 2005, was instrumental in boosting trade and investment between the two countries with bilateral trade increasing from S$16.6 billion in 2005 to S$25.2 billion in 2017.

The conclusion of the second review of CECA, after seven years of negotiations on greater access for Indian professionals and banks in Singapore, was announced early this month during Prime Minister Narendra Modi's visit to Singapore.

"We just completed the second review of CECA and we are embarking on a third review. So this is going to open up many new areas of cooperation in trade and investment... As the Indian economy continues to grow, there are many areas we can explore in trade and investment," said Mr Heng on Friday (June 29) at the end of his five-day visit to India during which he met a cross section of business and political leaders.

Mr Heng described his discussion with the Indian ministers as "fruitful" and said that ties between Singapore and India are "longstanding and deep".

But he also noted that the two countries must not be complacent. 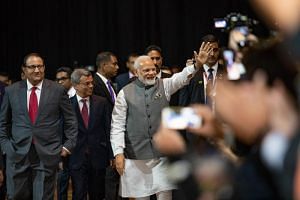 India and Singapore share close ties over the years. Singapore has helped India broaden its engagement with South-east Asia and establish links with the Asean grouping. The two countries have close political and economic ties with Singapore being one of the top foreign investors in India.

On air connectivity, Mr Heng noted the Singapore could serve as a base for India venturing into Asean and the rest of the world.

"India will certainly be looking at air connectivity with different countries in Asean and Asia and the world. But I think Singapore can serve as a very good base for developing that connectivity in the first instance," he said.

The minister said he believed "air connectivity is key to developing tourism, developing businesses and developing trade and investment".

"So I hope that as India reveals its air connectivity plans, Singapore will be a major part of this story and that we can enhance our bilateral air services agreement in a significant way," said Mr Heng.

There were nearly 500 weekly flights between Singapore and India with over four million passengers travelling between the two countries last year.

He also hoped for "stronger economic relations between Asean and India" and also among China, Japan, South Korea, India and Asean, while pushing for good progress on Regional Comprehensive Economic Partnership negotiations in the coming months.

Mr Heng said that following his discussions in India and earlier in Japan and China and colleagues in Asean, he had come away with a feeling of optimism.

"I am very glad that at a time when some countries are retreating from globalisation, the commitment to open rule-based global trading remains very strong among the Asian countries. In particular the commitment towards free and open trade as well as commitment to work together with one another."