SINGAPORE - President Halimah Yacob and Prime Minister Lee Hsien Loong have written to their Bangladeshi counterparts to express their condolences over the crash of a Bangladeshi airliner in Nepal's capital Kathmandu on Monday (March 12) that killed 49 people.

PM Lee has also written to his Nepali counterpart, Prime Minister K P Sharma Oli, to express his condolences over the tragedy that occurred at the capital's airport.

US-Bangla Airlines Flight BS211 was attempting to land at the airport when it crashed into a football field nearby and burst into flames. The plane, carrying 71 people, had taken off from the Bangladeshi capital of Dhaka.

In her letter to Bangladeshi President Md. Abdul Hamid, Madam Halimah wrote that she was "deeply saddened to learn of the crash" and expressed the people of Singapore's deepest condolences and sympathies to those who lost their loved ones in the tragedy.

"Our thoughts are with the families of the victims, and those who were injured in this tragic accident," she wrote.

"On behalf of the Government of the Republic of Singapore, I extend my deepest condolences to you and the families of those who have perished. Our thoughts are with them at this time of grief," he said. 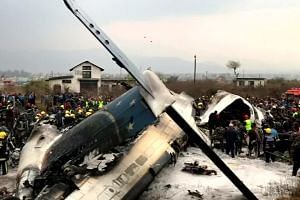 In his letter to Mr Oli, Mr Lee said he was saddened to hear of the tragic crash that took place in Kathmandu.

"On behalf of the Government of the Republic of Singapore, I extend our deepest condolences and sympathies to the families in Nepal who lost their loved ones in this tragedy. Our heartfelt sympathies also go to those who were injured in this tragic accident," he added.

Nepal on Tuesday began investigating the cause of the crash, the Himalayan nation's worst air disaster in decades.

Aviation authorities said the plane's flight data recorder had been recovered from the wreckage.

According to reports, recordings of the conversation between air traffic control and the pilot had indicated there was some confusion over the runway approach before the crash.