NEW DELHI (REUTERS) - Indian Prime Minister Narendra Modi's ruling alliance will win a thin majority in a general election that starts on Thursday (April 11), an average of four opinion polls showed, with a focus on national security appearing to trump concerns over jobs and farm prices.

The coalition led by Modi's Hindu nationalist Bharatiya Janata Party (BJP) is expected to win 273 of the 543 Parliament seats at stake, one more than the halfway mark required to rule.

In the last election the alliance won more than 330 seats - the biggest mandate in three decades.

Most of the polling agencies that released surveys in the last four days said Modi got a boost from recent tension with arch enemy Pakistan after a militant group based there killed 40 Indian policemen in the disputed region of Kashmir in February.

"In today's India we have seen perhaps for the first-time security issues competing with, and outdoing, a bread and butter issue like unemployment," CVoter said in a statement.

"Primarily, the BJP has been unable to sufficiently distinguish itself from Congress when it comes to making people feel the difference in terms of their livelihoods and economic interests.

"However, when it comes to controlling and responding on terror the same set of respondents do feel a clear and visible difference." 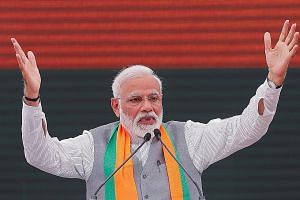 Modi's party unveils manifesto with something for everyone

The main opposition Congress and its allies are expected to more than double their seats to about 141 on average.

Pre-election opinion polls in India, with thousands of respondents, have proved unreliable several times in the past in a vast country of about 1.3 billion people, of whom about 900 million are eligible to vote.

Congress has accused the BJP of using retaliatory air strikes on Pakistan as a political tool and has instead highlighted job creation, tackling farm distress and empowerment of women, among its top priorities.

But the BJP has doubled down on national security issues, promising in its manifesto released on Monday to strip decades-old special rights from the people of Jammu and Kashmir.

Modi has said he will retain power with a bigger mandate than before, while Congress says its plan for annual handouts of 72,000 rupees (S$1,404) to the poorest families will help fuel its comeback.

The election will be held in seven phases and votes will be counted on May 23, with results likely to be clear the same day.