"'Touching the skies' is a good joke at a time when your flights are getting grounded," said a respondent on Twitter, while others expressed anger and dismay at cancellations, delays in refunds and long response times to telephone calls.

India's second-largest carrier, grappling with debt of more than US$1 billion (S$1.35 billion), Jet has delayed payments to banks, lessors, vendors and staff. Lessors have grounded more than three dozen planes, forcing hundreds of flights to be cancelled.

Rising customer frustration could bring further disruption for the 25-year-old airline, as some flyers backed a boycott, while others blamed cancellations for ruining their plans.

"We had to worry about rebooking flights during our wedding, when there is already so much to do," said Mr Siddhant Agarwal, a 32-year-old businessman whose flight home from his honeymoon was abruptly cancelled just days before his marriage.

Mr Agarwal, who is based in the capital, New Delhi, said he had to pay nearly twice as much for new tickets. "They did not even offer an apology, which is disappointing and unprofessional."

The airline, partly owned by Etihad Airways, did not respond to a request from Reuters for comment. 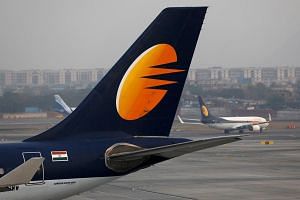 Jet Airways shares rise after report of chairman stepping down

India's cash-strapped Jet Airways will not be able to fly beyond 60 days: Reports

Amid talks for a bailout led by state-run banks, lessors have forced the airline to ground at least 37 planes over non-payment of dues and some have also threatened repossession.

It had 556 flights on average in January, down from 641 a year earlier, data from the aviation regulator showed.

Jet has planned cancellations of more than 600 flights in March, said one source with direct knowledge of the matter.

"The bigger worry is if people stop future bookings because that will affect cash flows," said the source, adding that cancellations in February and March outstripped prior months.

Jet Airways' market share shrank to 14.3 per cent in 2018 from 17.2 per cent a year earlier, even as India's aviation market grew nearly a fifth.

Some of the hundreds of aggrieved passengers who posted on the airline's Facebook page and Twitter told of delays on the way to wedding and festival celebrations, and several uploaded screenshots showing telephone wait times longer than an hour for a response from the customer call centre.

After a last-minute cancellation, comedian Kenny Sebastian expressed outrage on Twitter, warning his 1.74 million followers to avoid the airline.

"Best part is they made it sound like it was the passengers' fault," he said this week.