ISLAMABAD (AFP) - A hardline cleric has been charged with terrorism and sedition offences by the Pakistani government, after he led violent protests to oppose the acquittal of a Christian woman from blasphemy charges, a minister said Saturday (Dec 1).

Demonstrators blocked major roads in protest, burning cars and buses, and leaving large swathes of the country paralysed as they called for her execution to be carried out.

Rizvi was detained on November 24 after police launched a crackdown on hundreds of his supporters in Punjab province and the port city of Karachi.

Fawad Chaudhry, federal minister for information and broadcasting told reporters in Islamabad that sedition and terrorism charges had been made against Khadim Rizvi and other TLP leaders.

During the violent protests, one leader of TLP called for mutiny against the military chief, the murder of the judges who acquitted Asia Bibi, and branded Prime Minister Imran Khan as a "son of Jews." Chaudhry said these charges can carry a life term in prison.

"Other people who were directly involved in destruction of properties, insulting women and snatching their purses, burning buses, have been charged in terrorism cases," he said, saying more than 3,000 people had been arrested in connection with the TLP protests. 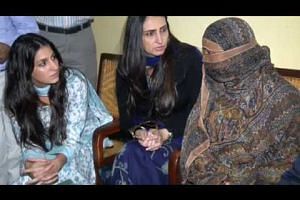 Husband of Pakistan blasphemy case woman calls for her protection

Netherlands recalls staff after threats at embassy in Pakistan

The government signed an agreement with the protesters at that time to bring about a quick end to protests - but launched a crackdown a few weeks later when the TLP threatened to launch another protest.

Blasphemy is a hugely inflammatory issue in Muslim-majority Pakistan, where even unproven allegations of insulting Islam and Prophet Mohammed can lead to lynchings and murders.

Bibi's conviction stemmed from a 2009 incident when she was asked to fetch water while out working in the fields.

Muslim women labourers objected to her touching the water bowl as a non-Muslim, and a fight reportedly erupted. A local imam then claimed Bibi insulted the Prophet Mohammed.

She spent eight years on death row before the Supreme Court decision to free her.