ISLAMABAD (AFP) - An opinion piece in the International New York Times criticising Pakistan's powerful army was censored by its local publisher on Tuesday (Feb 12), replaced by a blank space in a country where it can be dangerous to reprimand the military.

The article by Mr Manzoor Pashteen, the leader of a movement which calls for an end what it says are enforced disappearances and extrajudicial murders of ethnic Pashtuns by security officials, was widely available online, however.

It was headlined, "The Military Says Pashtuns Are Traitors. We Just Want Our Rights".

In it, the former veterinary student detailed how the impoverished north-west, along the Afghan border, has been "desolated" in Pakistan's long fight with militancy.

He described his group, the Pashtun Protection Movement (PTM), as "peaceful".

"We held numerous sit-ins and protests and continued to hope that Pakistan's leaders would try to address our concerns. Instead, they responded with intimidation and violence," he wrote.

"After every major protest, police arrests and charges PTM activists and supporters with rioting, treason or terrorism," he continued. 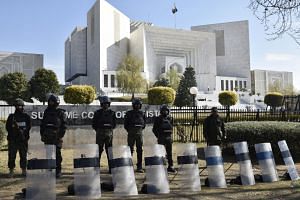 He also accused the security establishment of ensuring that "almost nothing is reported about our movement in the mainstream Pakistani newspapers and television networks".

The piece was "removed for print by our publishing alliance in Pakistan. The New York Times and its editorial staff had no role in its removal," a note at the bottom of the empty-single column on the front page said.

The New York Times did not immediately respond to a request for comment from AFP.

The paper is printed in Pakistan by the local English-language Express Tribune, which regularly censors New York Times articles, including a 2017 piece on an anti-gay crackdown in Chechnya and a piece from 2016 entitled, "Sex Talk for Muslim Women".

The Committee to Protect Journalists said in a report last year that the army had "quietly but effectively, set restrictions on reporting" in Pakistani media.

The PTM has rattled the military since it burst onto the scene early last year, unleashing festering anger over the alleged abuses against Pashtuns, who account for roughly 15 per cent of Pakistan's population.

The movement remains peaceful, but has been notable for its direct verbal attacks on the armed forces in a country where such criticism is largely seen as a red line.

The military warned the PTM last year that its patience is wearing thin.

"We realise their grief, their hardships, but (they) should not cross those lines, where the state has to use its force to control the situation," spokesman Major General Asif Ghafoor said in December.

She was released a day later, but several others remain in detention.