NEW DELHI (AFP) - A controversial Bill giving India's government sweeping powers to designate individuals as terrorists passed a major hurdle in Parliament on Wednesday (July 24), as opponents warned the legislation was too broad and open to abuse.

It comes in the wake of Prime Minister Narendra Modi's resounding victory in the general election in May, and amid accusations that his ruling Bharatiya Janata Party (BJP) is trying to stifle dissent in the world's largest democracy.

The main opposition Congress party - which led a parliamentary walkout as the Bill was debated - warned the proposed law was "draconian" and could turn India into a "police state".

The Bill has to be passed by the Upper House before it becomes law, with the government needing to court votes from smaller parties and independents for it to pass.

Home Minister Amit Shah defended the Bill in the Lower House on Wednesday, saying it was necessary to keep law enforcement agencies one step ahead of those deemed to be terrorists.

"The only purpose of this law is to root out terrorism. We will ensure that this law will not be misused," he said, before the Bill was passed by acclaim. 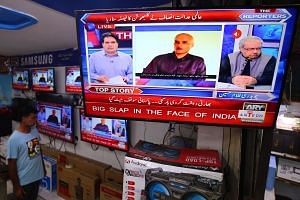 "Is this government assuring us that the law will not be misused in future?" asked Congress member Karti Chidambaram.

"Are you putting processes in place under which misuse will not happen?" Under the Unlawful Activities (Prevention) Amendment Bill, a person can be designated as a terrorist on broad grounds.

They include causing damage to any property, using criminal force against any public functionary or being likely to "strike terror in people".

Police will also be able to detain a suspect for 180 days, instead of the usual 60 to 90 days allowed under current legislation.

Human rights groups warned the proposed law will give the government unbridled opportunity to brand citizens as terrorists even before they commit any crime.

Amnesty International India said it could become a tool of repression, and criminalise dissent.