You might have heard about how a handsome blue-eyed Pakistani tea-seller, Mr Arshad Khan, became an overnight star on social media after his photo was posted on Instagram.

Now, a vegetable seller from Nepal, Ms Kusum Shrestha, is the latest hawker to make waves online with her good looks, BBC reported.

The 18-year-old was photographed carrying vegetables at a local market and the photos drew attention online when they were uploaded.

The hashtags #Tarkariwali and #Sabjiwali - which both mean "vegetable seller" - quickly started trending on social media as users praised her looks.

In one picture, the teenager is seen smiling as she carries crates of tomatoes across a bridge. In another one, she is captured talking on a mobile phone while selling vegetables at a market.

Ms Shrestha is from a farming family based in Bagling, Gorkha, which is about 90km west of capital Kathmandu.

She told BBC Nepali she is a student in the nearby district of Chitwan, and was helping her parents during the college holidays when the shots were taken.

Photographer RupChandra Maharjan told Nepalese blog Gundruk Post that he photographed Ms Shrestha at the Fishling suspension bridge between Gorkha and Chitwan. He reportedly works for a rafting company on the local Trishuli River.

Ms Shrestha told the BBC she found out about her viral pictures from a friend.

"First my friend asked me if I am the same girl whose photos became viral on Facebook. But I didn't know," Ms Shrestha said.

Many users on Twitter and Facebook admired the teenager's work ethic. One of them, @SabyasachiPuhan, said she combined "cuteness and hard work".

One fan even suggested that Mr Khan, the Pakistani tea-seller and Ms Shrestha would make an ideal couple.

Ms Shrestha told the BBC she was thrilled with her newfound fame. When asked if she would like to take up modelling like Mr Khan if an opportunity arises, she beamed and said: "Yes, I will go."

Her father Narayan Shrestha, 43, told Nepalese news website myrepublica.com: "I hear that her photos have become popular on the Internet. Who had imagined that she would get such publicity? My daughter has always been a shy girl; she is a girl of very few words." 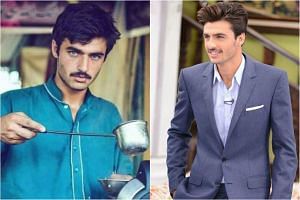 Mr Shrestha said his daughter is studying management. However, her dream is to be a nurse.

"She is my only child. I should educate her to the extent possible (sic)," he said. "But I also have to consider my financial situation. I could not admit her into a nursing college though she wanted to study nursing."

He said the interest in his daughter showed that the public respects farmers and their hard work.

"This is what I feel. There is nothing else that I expect," he added.