KATHMANDU (XINHUA, KATHMANDU POST/ASIA NEWS NETWORK) - Nepal logged another record high of Covid-19 cases on Thursday (May 6) with 9,070 infections, raising concerns that it could be like next-door India which is struggling through a tsunami of coronavirus infections and deaths.

Nepal has also been reporting a surge of deaths caused by Covid-19 with 54 new deaths reported on Thursday, the third day in a row that the country has chalked up more than 50 deaths.

The spike in Covid-19 cases started on April 18 when 1,015 cases were recorded, and began hitting new highs from then on, overwhelming the healthcare system as patients scramble for intensive care beds.

Worse, Nepali health experts say the reported cases do not represent the true prevalence of the scourge, with contact tracing virtually stopped in recent months.

"The data released by the Nepali government are of just those who were tested after developing symptoms of the disease," Dr Binjwala Shrestha, an assistant professor at Tribhuvan University Institute of Medicine, told Xinhua.

"If you conduct tests among all the people in a community, you can find several-times-higher infections than currently reported cases."

Nepal is reporting about 20 daily Covid-19 cases per 100,000 people, about the same number as India was reporting two weeks ago, CNN reported on Thursday. The two countries share a long and porous border.

"What is happening in India right now is a horrifying preview of Nepal's future if we cannot contain this latest Covid surge that is claiming more lives by the minute," Nepal’s Red Cross chairman, Dr Netra Prasad Timsina, said in a statement quoted by CNN.

In capital Kathmandu, the Sukraraj Tropical and Infectious Disease Hospital had increased the number of beds from 60 to 90, with all rooms, corridors and emergency departments occupied by beds of the infected.

"We are not in position to extend further," Dr Sagar Rajbhandari, director at the hospital told the Kathmandu Post. "Neither do we have the human resources, nor the space to extend the number of beds."

Reports suggest a similar dire situation is happening across the country. In Banke, one of the worst-hit districts, Covid-19 patients are being turned away for a lack of beds and oxygen.

Doctors say the crisis could soon become unmanageable if the authorities fail to take immediate measures to flatten the curve, as many many health care workers have been infected.

Criticised for his handling of the health crisis, Prime Minister Sharma Oli has since asked the army to help manage emergency facilities to take pressure off the health system, The Guardian reported on Thursday.

Mr Oli earlier this week appealed to the international community for vaccines, with officials warning that those who had received the first dose of the AstraZeneca jab were in urgent need of second shots.

The haphazard vaccination campaign saw people queueing for hours to get jabs and has been blamed for spreading the disease, The Guardian said. 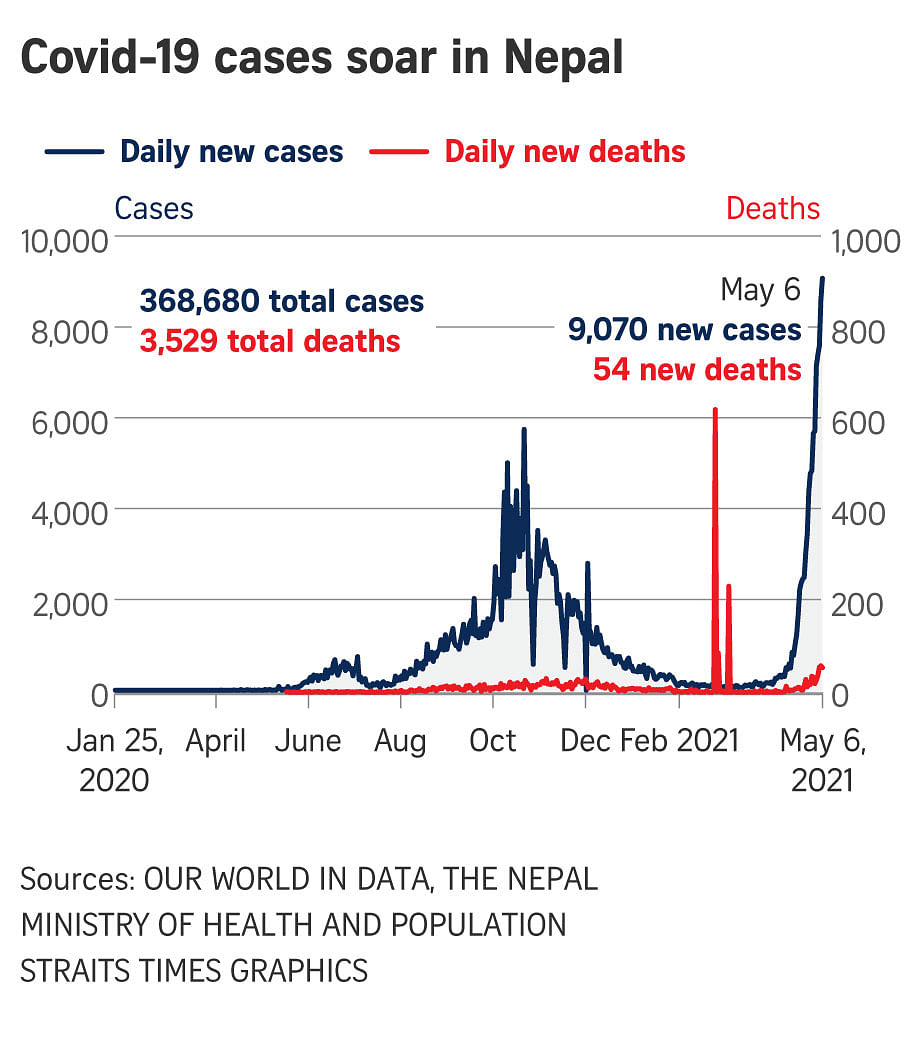