COLOMBO (REUTERS) - Shops owned by Muslim traders in the Sri Lankan central highlands district of Kandy will remain closed on Sunday (July 7) as thousands of hardline Buddhist monks gather to decide who to back in the country's upcoming presidential elections.

There have also been a spate of anti-Muslim riots in the country in recent weeks, blamed in part on Buddhist groups, in apparent reprisal for April bombings claimed by Islamic State in Iraq and Syria (ISIS) that killed more than 250 people.

"All Muslim-owned shops are likely to be closed on Sunday to avoid any possible confrontation, as thousands of monks are expected in the town for the conference," Niyaz Muheeth, president of the Kandy Muslim Traders Association, told Reuters.

In response, BBS said in a statement thousands of monks are expected to gather in Kandy to take a crucial decision on behalf of the country.

In a letter to police seen by Reuters, Dilantha Withanage, CEO of BBS, accused Muslim groups including ACJU of trying to sabbotage the Sunday event, by misleading the police with fabricated information and complaints.

Sri Lanka has had a history of ethnic and religious violence and was torn for decades by a civil war between separatists from the mostly Hindu Tamil minority and the Sinhala Buddhist-dominated government. The war ended in 2009.

In recent years, Buddhist hardliners, led by BBS, have stoked hostility against Muslims, saying influences from the Middle East have made Sri Lanka's Muslims more conservative and isolated. 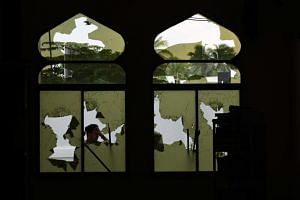 Fighting for the soul of Islam in Sri Lanka

Religious minorities across Asia suffer amid surge in sectarian politics

Buddhists make up about 70 per cent of Sri Lanka's 22 million people while Muslims account for 10 per cent.

The Buddhist gathering on Sunday comes ahead of presidential polls scheduled to be held either in November or December in which President Maithripala Sirisena, former defence secretary Gotabaya Rajapaksa, and Prime Minister Ranil Wickremesinghe could be possible candidates.

Gnanasara, a hardline monk who is accused of inciting violence against Muslims and has been leading the campaign against Islamic extremism, has called for as many as 10,000 Buddhist clergy to attend the meet, in an effort to unite Sinhala Buddhists.

The monk, who was released from prison last month after a pardon by Sirisena over contempt of court charges, has also hinted BBS may back a surprise candidate, whose views are more aligned with the group's ideology, to contest the elections.

"We will either mould our political leaders, or we will send them home," he said at a press conference on June 21.