NEW DELHI - Controversy over the sudden dissolution of the Jammu and Kashmir assembly last week is further stoking political tensions in the Indian state, which is already facing escalating violence.

One comprised the federal opposition Congress, along with two local parties - the National Conference (NC) and People's Democratic Party (PDP). The other alliance was led by J&K People's Conference leader Sajjad Lone, a Kashmiri leader, who was supported by the Bharatiya Janata Party (BJP) ruling in Delhi.

Mr Malik, who was appointed by Prime Minister Narendra Modi, has come under fire for dissolving the assembly without allowing the three-party alliance - which he apparently dismissed as an "unholy" one - to prove its majority in the legislature.

The BJP has denied that it was behind dissolution of the assembly to prevent a rival faction from coming to power.

Senior BJP leader Ram Madhav added to the drama by alluding in a tweet that the NC and PDP took directions from Pakistan to form an alliance. Mr Madhav later retracted the remarks.

Said political analyst Happymon Jacob from Jawaharlal Nehru University: "All these incidents will increase unhappiness Kashmiris traditionally have towards Delhi (federal government) and the BJP in particular. Calling mainstream parties anti-national and pro-Pakistan will not help at a time when terror attacks and infiltration are increasing. 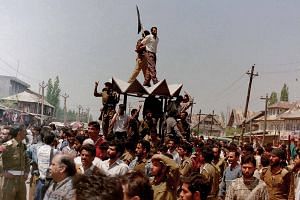 "People are generally unhappy with the way the BJP was trying to make inroads into the political scenario in Kashmir and the dissolution will have serious implication," he added.

Kashmir has been under governor's or federal rule since the BJP pulled out of a ruling coalition in June that included the PDP headed by its leader Mehbooba Mufti.

Kashmir, which has been at the heart of a conflict between India and Pakistan, has had a troubled history with thousands of people killed by violence fuelled by a separatist insurgency which began in 1989.

Following a period of relative calm, the last few years have seen a deterioration in the law and order situation, particularly after the killing of Burhan Wani, the commander of the Kashmiri militant group Hizbul Mujahideen, by security forces in 2016.

On Sunday, AFP reported that eight people were killed in violence, capping off one of the deadliest weeks this year.

Against this backdrop, the turbulence on the political arena has added to the sense of alienation among Kashmiris.

Said Dr Noor Ahmad Baba of the Department of Politics and Governance in Central University of Kashmir: "By and large people don't have high opinion of the democratic process. These political developments only vindicates that opinion."

There has been a lukewarm response to elections this year.

In recent village council polls over 100 seats went uncontested, meaning there was only one candidate willing to take part. Municipal elections held early this year saw only a four per cent voter turnout.

The Election Commission has said that fresh polls should be held within six months.

"Kashmir needs political stability at a time when it is passing through a critical time. This entire episode has been a blow to democracy," said Kashmir-based writer Ghulam Nabi Khayal.