COLOMBO (AFP) - Voting began in a controversial presidential election in the Maldives on Sunday (Sept 23), amid fears that the process has been rigged in China-friendly strongman Abdulla Yameen's favour.

Mr Yameen has imprisoned or forced into exile all his main rivals, and is expected to retain his hold on power in the Indian Ocean island nation.

Foreign monitors and the opposition have slammed his government for its crackdown on opponents and the media, and urged the international community not to recognise the results of the election.

Before polls opened, police raided the campaign headquarters of the opposition Maldivian Democratic Party (MDP) and searched the building for several hours in a bid to stop what they called "illegal activities". There were no arrests.

Despite the crackdown, hundreds of Maldivians headed to polling booths before voting began in the capital Male.

"There is a lot of enthusiasm. Voters lined up to vote despite overcast weather," MDP party worker Shauna Aminath said.

Mr Yameen has borrowed hundreds of millions of dollars from China to build up infrastructure, alarming the nation's long-time backer India. 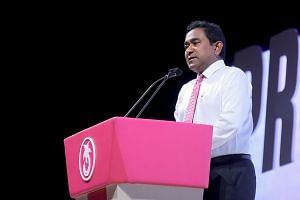 The European Union has said it is ready to impose travel bans and asset freezes on individuals "if the situation does not improve", while the United States has warned it would "consider appropriate measures" against those undermining democracy in the country of 1,200 islands.

Some 262,000 people in the archipelago - famed for its white beaches and blue lagoons - can vote in an election from which independent international monitors have been barred.

Only a handful of foreign media have been allowed in.

The Asian Network for Free Elections, a foreign monitoring group, said the campaign was heavily tilted in favour of the 59-year-old Yameen.

The network said it did not expect a fair contest.

"In the absence of any scrutiny (of the elections) or pressure (on the government), sombre events surely loom ahead for the people of Maldives," it said on the eve of the vote.

In February, Mr Yameen alarmed the international community by imposing a state of emergency, suspending the Constitution and sending troops to stop members of Parliament who were trying to impeach him.

The chief justice and a judge of the Supreme Court were jailed along with Mr Yameen's half-brother Maumoon Abdul Gayoom, president for 30 years until 2008 and the man who helped Mr Yameen come to power in 2013.

The United Nations said the arrest of judges was an "outright assault on democracy".

Mr Mohamed Nasheed, the Maldives' first democratically elected president from 2008-12 but now in exile, called last Friday for the international community to reject the election results.

"Mathematically, it is not possible for Yameen to win because all opposition parties are united against him," said Mr Nasheed, who is based in Sri Lanka.

"But the results they will announce will be different to what is actually in the ballot boxes."

Mr Nasheed was forced to withdraw from the presidential race after the Maldives election commission disqualified him because of a 2015 terrorism conviction.

The UN said the conviction and 13-year jail sentence were politically motivated, but Mr Yameen's government has refused to abide by the UN ruling.

The MDP has named veteran lawmaker Ibrahim Mohamed Solih as its alternative candidate. The relatively unknown Solih has Nasheed's backing. There are no other candidates.

Mr Solih has struggled for visibility with the electorate because the media is fearful of falling foul of heavy-handed decrees and reporting restrictions.

The government has used "vaguely worded laws to silence dissent and to intimidate and imprison critics", some of whom have been assaulted and even murdered, according to Human Rights Watch.

Eligible voters in neighbouring Sri Lanka and India, along with those in Malaysia and Britain, are entitled to vote on Sunday. The results are expected by midday on Monday.

A candidate must secure 50 per cent of the vote to win outright, failing which there would be a run-off three days later.