Results released by the Elections Commission showed Mr Solih securing 133,808 votes compared to the 95,526 for incumbent Abdulla Yameen. The voter turnout was over 88 per cent out of the 262,000-strong electorate.

There were no other candidates at Sunday's election, which was held with all key dissidents either in jail or exile. The campaign was also marred by severe restrictions on the opposition and the independent media.

Mr Solih had the backing of a united opposition trying to oust Mr Yameen, but struggled for visibility with the electorate, with local media fearful of falling afoul of heavy-handed decrees and reporting restrictions.

"I call on Yameen to respect the will of the people and bring about a peaceful, smooth transfer of power," Mr Solih said on television, shortly after interim results from the country's election commission gave him an unassailable 58 per cent of the popular vote.

He also urged the incumbent to immediately release scores of political prisoners.

Mr Yameen, who was widely tipped to retain power, had jailed or forced into exile almost all of his main rivals. 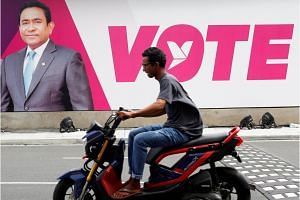 Maldives election will not be free and fair, say foreign monitors

Before polls opened, police raided the campaign headquarters of the opposition Maldivian Democratic Party (MDP) and searched the building for several hours in a bid to stop what they called "illegal activities". There were no arrests.

Mr Mohamed Nasheed, the head of Mr Solih's MDP, said the vote would "bring the country back to the democratic path".

Mr Yameen would have no option but to concede defeat, said Mr Nasheed, who was elected president of a newly democratic Maldives in 2008 but currently lives in exile.

"He will not have people around him who will support him to fight on and stay," he told AFP.