COLOMBO (AFP) - The Maldives' military chief on Wednesday (Sept 26) quashed speculation that outgoing President Abdulla Yameen would try to cling on to power, telling the nation that the armed forces would "protect the will of the people".

Yameen decisively lost the country's Sunday presidential election to opposition leader Ibrahim Mohamed Solih, despite warnings from private poll monitors that the electoral process had been rigged in favour of the incumbent.

Formal poll results will be announced by the election commission on Sunday and Yameen must hand over power to Solih on Nov 17 at the end of his five-year term.

But rumours have abounded on social media and elsewhere that Yameen could file an election petition seeking the delay of the announcement, prompting military chief Major-General Ahmed Shiyam to appear on a private TV channel promising the results would be honoured.

"The people have spoken," Shiyam said.

"I want to assure the Maldivian people that the military will protect the will of the people." 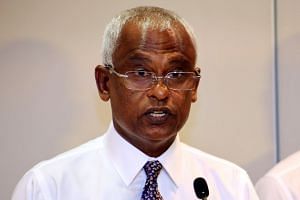 "We will look into these concerns," Shareef said, adding that there were no grounds for him to delay the announcement of the formal results.

Earlier Wednesday, the opposition accused Yameen of delaying the release of high-profile political prisoners despite calls by his successor for their release.

Shortly after his shock defeat, Yameen freed five prisoners. But scores of others - including Maumoon Abdul Gayoom, his estranged half-brother and former president - remain incarcerated.

Yameen jailed or exiled most of his rivals during his turbulent five-year term.

Suspecting a plot to impeach him, Yameen in February declared a state of emergency and arrested top judges as well as political opponents.

Yameen's rule dented its image as a honeymoon paradise and attracted alarm abroad.

The US and EU had threatened financial sanctions unless the presidential poll was free and fair.