NEW DELHI - An entrepreneur, called the coffee king for building India’s biggest coffee cafe chain, has gone missing near a river in the south of the country, triggering a massive search operation involving the police, coast guard and National Disaster Response Force.

Mr V.G. Siddhartha, 60, who built the Cafe Coffee Day (CCD) chain into one of India’s most recognisable brands over the past two decades, went missing on Monday evening (July 29) between 6 and 8 pm local time, said police.

The chairman and managing director of Coffee Day Enterprises got off his car at a bridge over the Nethravathi River on the outskirts of Mangaluru, a port city in Karnataka state.

He asked his driver to drive on to the end of the bridge and wait. The driver and Mr Siddhartha’s family have been unable to contact him since.

Deputy Commissioner of Police Hanumantharaya told The Straits Times: “The search is going on. The police, coast guard and coastal security are all involved in the search operation.”

Sniffer dogs were also used to see if they could pick up a trace of the entrepreneur, reports said.

Indian media speculated that the entrepreneur could have taken his life amid financial woes after a letter reportedly written by him to the company board and “CCD family” came to light.

The letter, shared widely on social media and by the media, points to growing debt and alleged harassment by a senior unnamed tax official and lenders. The validity of the letter could not be verified.

“Every financial transaction is my responsibility...the law should hold me & only me accountable... My intention was never to cheat or mislead anybody, I failed as an entrepreneur. This is my sincere submission I hope someday you will understand, forgive and pardon me,” said the letter.

“I fought for a long time but today I gave up....I sincerely request each of you to be strong and to continue running these businesses with a new management.”

The entrepreneur, who was born in Chikkamagaluru in Karnataka, is married to Malavika Hegde, the daughter of former Karnataka chief minister and former external affairs minister S M Krishna. The couple have two children. 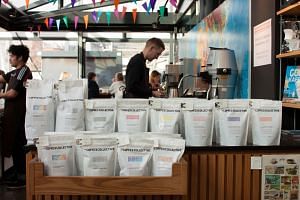 Big names in the coffee world to meet in Singapore

Starbucks sales growth to be steady despite deals

The brand grew to be a widely recognised brand with 1,700 cafes across India and abroad in countries including Malaysia and Nepal. While local cafe chains were not able to scale up to the level of Cafe Coffee Day, the chain is in direct competition with international chains like Starbucks and Costa Coffee.

There were rumblings of trouble earlier. In September 2017, tax authorities conducted raids in multiple locations related to the coffee chain.

More recently, The Economic Times said Mr Siddhartha was reportedly in talks with Coca-Cola to sell a stake in his company. But neither company made any statement.

Indian media reported in March this year that he sold around 20 per cent stake in software services company Mindtree Ltd to Larsen and Toubro Ltd .

Still, at least one friend of the entrepreneur called the disappearance ”fishy”.

Congress leader D K Shivakumar told the media that he had spoken to Mr Siddhartha on July 28.

“However, I find this utterly fishy and urge that a thorough investigation be conducted into this matter,” tweeted Mr Shivakumar.

Some suggested the alleged problems facing Mr Siddhartha reflect the wider troubles with the economy, which include weakening consumer demand and a liquidity crunch.

Editor-in-chief of The Print Shekhar Gupta tweeted that India’s entrepreneurial climate “is turning toxic by the day, with tax terror & over-criminalisation added to an economic collapse we keep denying.”