KATHMANDU (THE KATHMANDU POST/ASIA NEWS NETWORK) - A major new campaign hopes to clean up Mount Everest by collecting and bringing back tonnes of garbage from the world's highest peak.

The 45-day "Everest Cleaning Campaign", led by Solukhumbu district's Khumbu Pasanglhamu Rural Municipality, is one of Nepal's most ambitious cleanup projects for Everest, which has lately acquired notoriety as the "world's highest garbage dump". The campaign, which began on April 14 with the Nepali new year, aims to collect nearly 10,000kg of garbage from Everest.

Every year, hundreds of climbers, sherpas and high-altitude porters make their way to Everest, leaving behind tonnes of both biodegradable and non-biodegradable waste, including empty oxygen canisters, kitchen waste, beer bottles and faecal matter.

The campaign will collect and bring back 5,000kg of waste from Everest Base Camp, 2,000kg from South Col, and a combined 3,000kg from Camp I and Camp II, according to Mr Danduraj Ghimire, director general of the Department of Tourism.

"Our goal is to extract as much waste as possible from Everest so as to restore glory to the mountain," Mr Ghimire told the press conference organised at the Department of Tourism in Kathmandu. "Everest is not just the crown of the world, but our pride."

Khumbu locals, conservationists and environmental activists have long pointed out the garbage accumulating on Everest, warning of a potential environmental and health catastrophe. The government, too, has been concerned that the rubbish would tarnish the mountain's magnificence.

There have been attempts in the past to clean up Everest, including a 2014 government-mandated provision making it mandatory for every climber to come down from the peak with at least 8kg of garbage - the amount of waste estimated to be produced by one climber. 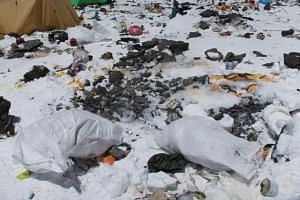 "If only climbers brought back their own waste, it would greatly help to keep Everest clean," said Mr Ghimire. "It's not about the 8kg waste, but bringing back the waste they produce."

Non-profits like the Sagarmatha Pollution Control Committee (SPCC) have also conducted periodic campaigns to keep Everest and the Khumbu region clean by collecting and disposing of waste.

Besides rubbish, the campaign will also attempt to retrieve the dead from Everest. The cleanup campaign has already discovered four bodies of dead climbers on the mountain. Everest is a treacherous mountain and every year, a number of climbers do not make it back. Their bodies are often abandoned on the mountain since bringing them back would pose too great a risk. This has led to the mountain becoming a veritable graveyard.

A recent BBC report said that the melting of glaciers was now exposing the bodies, which are usually covered by layers of snow and ice. Officials said that these bodies will be brought back and those unidentified will be cremated according to legal procedures.

"Everything on Everest, other than rock and snow, will be brought back," said Mr Tika Ram Gurung, secretary of the Nepal Mountaineering Association. "The goal is to send the message that we should keep this mountain pollution free."

A 12-member team, which includes Nepal Army personnel, has been deployed for the cleanup campaign. From among the 12, a group of eight sherpas will be based at Camp II, with three members taking turns moving towards Camp IV on the South Col, collecting garbage. The team will spend five days at South Col.

Since mid-April, the campaign has already gathered nearly 3,000kg of waste, out of which 2,000kg has been deposited at landfills in Okhaldhunga and the rest handed over to the social enterprise Blue Waste to Value, a recycling organisation.

The cleanup team is currently at Everest Base Camp and will march towards Camp II on Monday (April 29), said Mr Ghimire. The team will go as high as they can, collecting and bringing back garbage.

The month-and-a-half cleanup campaign is supported by a number of governmental and non-governmental agencies, including the federal Ministry of Culture, Tourism and Civil Aviation, Ministry of Forest and Environment, Nepal Army, provincial Ministry of Industry, Tourism, Forest and Environment, Nepal Mountaineering Association, and Sagarmatha Pollution Control Committee. The cost of the campaign is estimated at 23 million Nepali rupees (S$279,000).

"Initially, we thought we might lack funds, but we've managed adequate resources so far with support still pouring in," said Mr Ghimire. "Additional funds can always be used for similar cleanup campaigns on other peaks."

Three army helicopters - two to carry garbage and one for rescue operations - will be on standby, said Brigadier General Bigyan Dev Pandey, spokesman for the Nepal Army.

The campaign will conclude on May 29, the day which is marked every year to commemorate the first summiting of Everest by Mr Edmund Hillary and Mr Tenzing Norgay in 1953. The collected waste will then be "showcased" in Namche, before being ferried down to Kathmandu, where it will once again be showcased on World Environment Day on June 5. Only then will it finally be sent out for recycling, said officials.