SRINAGAR, INDIA (AFP) -Authorities in Indian-administered Kashmir placed large parts of the disputed region under lockdown early Monday (Aug 5) while India sent in tens of thousands of additional troops and traded accusations of clashes with Pakistan at their de facto border.

Before the network disruptions, senior former and current Kashmiri political leaders tweeted that they had been put under house arrest.

The Himalayan region has surged back into the spotlight in the past few days, months after a militant attack on an Indian paramilitary convoy claimed by a Pakistan-based group sparked cross-border airstrikes by the nuclear-armed rivals.

They have controlled parts of the region since the end of British colonial rule on the subcontinent in 1947.

But both claim it in full and have fought two of three wars over the territory, where a decades-long insurgency on the Indian side has killed tens of thousands.

"As per the order, there shall be no movement of public and all educational institutions shall also remain closed," the state government ordered for Srinagar, the capital of Indian-administered Kashmir, and surrounding areas in a statement obtained by AFP.

"There will be a complete bar on holding any kind of public meetings or rallies during the period of operation of this order."

Universities, schools and colleges in the Hindu-dominated Jammu were ordered to be shut, and one district in that region was placed under lockdown. 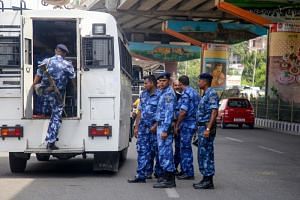 Several other major districts of the Muslim-majority state were also placed under restrictions, local media reported.

The latest tensions started in the last 10 days after New Delhi deployed at least 10,000 troops. A security source told AFP a further 70,000 had been deployed, which is believed to be an unprecedented level.

The government has introduced other security measures over terror threat claims - including a call to stock up food and fuel.

The measures have sparked growing panic among residents, who formed long queues outside petrol stations, food stores and cash machines.

A heavy presence of troops was seen in parts of Srinagar as gunshots sounded, although the streets remained empty, local residents told AFP.

In downtown Srinagar, government forces threw "chili bombs" that affect respiratory systems onto the deserted streets, a local resident said, while a senior official told AFP that nearly 300 administrative officials and top security officials had been issued with satellite phones.

"I believe I'm being placed under house arrest from midnight tonight & the process has already started for other mainstream leaders," Omar Abdullah, a former chief minister of Jammu and Kashmir, tweeted before communications were cut.

The last time similar restrictions were imposed in the territory was in 2016 after the killing of a popular rebel leader, which sparked months of street protests that left nearly 100 dead.

The restrictions came as India and Pakistan traded tit-for-tat accusations of attacks across the Line of Control, the de facto border dividing Kashmir.

The Indian army said Sunday it had foiled an attempt by a Pakistani team of army regulars and militants to cross the Line of Control, killing "five to seven" attackers.

Pakistan described the claim as "baseless" and accused India of using cluster bombs against civilians, killing four people and injuring 11 others.

Muhammad Siddique, the father of one victim, told reporters his son Ayan Ahmad was killed by an unexploded cluster munition while he and other youngsters played with it.

Pakistan's Prime Minister Imran Khan on Sunday accused India of taking "new aggressive actions", saying it could "blow up into a regional crisis".

He called a meeting of the country's national security committee to review the situation in Kashmir.

Tourists and students have scrambled to leave the picturesque region since the government said they should depart "immediately", amid new intelligence about "terror threats" to a major Hindu pilgrimage in the region.

While the Indian military and the state government have highlighted the security risk, Kashmiri and opposition politicians in New Delhi are concerned the extra troops were deployed for other reasons.

Since mid-2018, Indian Kashmir has been under Delhi's direct rule after Prime Minister Narendra Modi's Bharatiya Janata Party withdrew support for its local partner and dissolved the local government.

There are fears Modi's Hindu nationalist government could carry out a threat to scrap the region's special status under the constitution.