NEW DELHI (AFP) - Beleaguered Indian liquor tycoon Vijay Mallya on Monday resigned as a lawmaker, even as a committee was preparing to expel him from Parliament over an unpaid billion dollar bank loan.

The 60-year-old, a part-owner of the Force India Formula 1 team who used to run a liquor empire and Kingfisher Airlines, left India on March 2 despite calls for his arrest and is believed to be in Britain.

"He has resigned from Rajya Sabha (upper house) of the Indian Parliament," Mallya's spokesman said.

Last week the ethics committee from parliament's upper house asked the embattled businessman to explain his conduct, after it unanimously decided to expel him over huge bank debts. 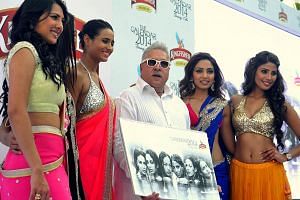 Party's over for India's beer and spirits tycoon

He reportedly travelled to Britain on a diplomatic passport while a group of public banks chased him for US$1.43 billion (S$1.92 billion) in unpaid loans.

A two-time independent MP, Mallya has an arrest warrant against him over money laundering charges.

Once dubbed the "King of Good Times" for his lavish lifestyle, he represented his home state of Karnataka in the Rajya Sabha in 2002 and became a politician again in 2010, a term expiring in June 2016.

An active Twitter user, his profile continues to introduce him as a member of parliament.

Last month the Indian government revoked Mallya's passport, after he repeatedly failed to appear before investigators looking into financial irregularities at Kingfisher Airlines, which shut down in 2012 after several loss-making years.

India has requested British authorities to deport him to face investigations in his home country.

His massive debt has become a symbol of Indian banks' vast volume of bad loans - meaning in default or close to it - seen as a threat to financial stability in Asia's third-largest economy.

He has denied absconding and has criticised the media for what he has called a "witch hunt".