SRINAGAR, INDIA (AFP) - Outside a guarded government office in Indian Kashmir's main city, an interminable queue forms every day for a near-priceless opportunity: a two-minute phone call to the outside world.

Residents of Srinagar and the Kashmir Valley have been starved of phone and Internet use for a week as India snuffs out opposition to its military lockdown in the Himalayan region.

Only two mobile phones with an outside line are on offer in the deputy commissioner's office, but so desperate are people to contact families in the rest of India and overseas that they come from across Srinagar and beyond to wait in line.

Under the watchful eye of Indian paramilitaries, the calls and conversations are tightly controlled, and simmering frustrations often boil over.

One 56-year-old woman, who had walked miles and was stopped at dozens of checkpoints along the way, became embroiled in an argument with security forces outside the office after she was turned away.

"They stopped me from entering because they don't have a female police officer to frisk me," the dejected woman, who was hoping to call her two children studying abroad, told AFP.

In the end, she was left with no choice but to give her children's numbers to a stranger in the queue and plead with him to try and contact them.

India deployed tens of thousands of additional troops to back its move last week to strip Muslim-majority Kashmir of its autonomy, and Prime Minister Narendra Modi has not indicated how long the communications blackout and lockdown will last.

A crippling curfew has been eased ahead of the Eid al-Adha festival on Monday (Aug 12), but there is still a massive security presence on the streets. 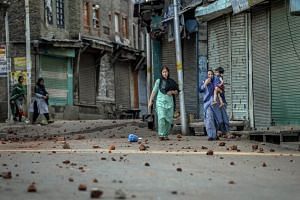 The government has issued a few hundred satellite phones to police and top bureaucrats, while dozens of other officials have mobile and landline numbers linked to a private network.

Each day, the queue builds up early and jostling starts when an official emerges from a poorly lit corridor to take the names and numbers to be called in a register.

"We are trying to help people to connect with relatives abroad," the officer said on condition of anonymity.

He reads out names of the lucky callers and hands over the mobile phone to each one. He also times each call, waving his hands when the 120 seconds are nearly up.

Mr Mubashir Hussain's excitement turned to frustration when his call to a brother in the United States went unanswered.

"He must be away from his phone or sleeping. There is a time difference," the 44-year-old businessman said as he handed back the phone.

A three-decade insurgency against Indian rule in Kashmir has left tens of thousands dead, and communication clampdowns are nothing new.

According to the Software Freedom Law Centre, a New Delhi monitoring group, there have been dozens of Internet shutdowns this year alone.

But the current restrictions - affecting the mobile network, landlines and cable TVs - are on a different scale.

"We are being literally pushed into stone age. Cutting communication is a violation of basic human rights," said Mr Hussain.

Mr Shakeel Ahmad Khan said he had to plead with troops at several checkpoints to let him pass so he could try to contact his elderly parents who have been on the Hajj pilgrimage in Saudi Arabia since last month.

"I saw my mother in a dream last night and she said they are fine," he said as he waited.