TEL AVIV - Israel's Prime Minister Benjamin Netanyahu landed in New Delhi on Sunday (Jan 14) to begin a historic trip to cement bilateral relations with India, having left behind a scandal embroiling his son back home.

Before Mr Netanyahu's arrival, one could be forgiven for thinking that relations between Israel and India were lurching towards a crisis.

Yet on Sunday, Indian Prime Minister Narendra Modi and Mr Netanyahu did their best to make these incidents appear like irrelevant hiccups in a strategic relationship.

Mr Modi even broke with protocol to welcome Mr Netanyahu personally on the tarmac of New Delhi's airport with a warm hug and a Twitter post in Hebrew: "Welcome to India, my friend Prime Minister Netanyahu. Your visit to India is historic and special. This visit will strengthen the close ties between our countries."

Israel and India have come a long way since their days of enmity in the 1970s, when New Delhi consistently voted against the Jewish state in the UN.

After establishing diplomatic relations 25 years ago, they collaborated closely in almost every field. India is the biggest buyer of Israeli weapons in the world and bilateral trade stands at US$5 billion annually.

In the past decade, Israel has invested more than US$100 billion in India. This has paid diplomatic dividends for Jerusalem, with New Delhi abstaining during critical votes at the UN in recent years. 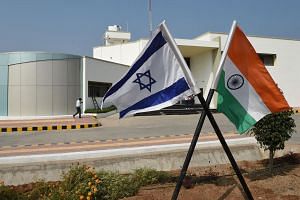 Ignoring New Delhi's stance on Jerusalem, Mr Netanyahu said he saw his visit to India as an "opportunity to cement cooperation with a world power in the areas of trade, security, technology, and tourism".

During the visit, which will also take him to Mumbai and Mr Modi's home state of Gujarat, Mr Netanyahu will sign nine bilateral agreements in the fields of aviation, renewable energy, cybersecurity, alternative medicine, and cinema. He is accompanied by a 130-strong business delegation.

Jerusalem stressed the anticipated cooperation agreement with India's Bollywood film industry: "India has a growing middle class, which we want to acquaint with our country as a tourist destination," Foreign Ministry spokesman Immanuel Nachschon told The Straits Times. According to polls, Indians generally hold a positive opinion of Israel, he said.

"We want more and more Indian movies to be shot in Israel, to normalise the image they have of our country, and pique their interest to visit us."

Mr Netanyahu's eldest son Yair, 26, would have been also in India, having received a personal invitation from Mr Modi.

Israeli officials provided no explanation for his absence, but the decision probably had to do with an audio tape that surfaced last week.

In the recordings,Yair is heard bragging to his friends about visiting prostitutes, and offering to set his friends up with his model ex-partner to settle his debts to them.

Speaking purportedly to the son of an Israeli tycoon, Yair claims that a highly controversial law his father pushed through in parliament to regulate Israel's gas market has enriched his friend's father by US$20 billion.

Both father and son have since expressed regret at both the content and language used in the conversations recorded about two years ago. Still, the Prime Minister went on the offensive, accusing the media of orchestrating a witch hunt to get rid of him.

This is the latest in a series of scandals to plague Mr Netanyahu. He is already facing two corruption probes and the police are expected to recommend indicting him by April.