PESHAWAR, Pakistan (AFP) - The Islamic State in Iraq and Syria (ISIS) group on Saturday (Nov 24) claimed responsibility for a suicide attack that ripped through a marketplace in Pakistan's restive northwestern tribal region, as the death toll climbed to 33.

The blast happened during a regular Friday bazaar in Kalaya, a town in a Shi'ite-dominated area of Orakzai tribal district.

In a statement posted on Amaq, the news site of the group, ISIS said claimed "57 Shi'ites were killed and 75 were wounded" in the attack.

However, on Saturday the top official for Orakzai district Khalid Iqal told AFP that the death toll was 33, up from 31 on Friday.

"Among the dead are three Hindu merchants," he added.

Pakistan has officially denied existence of ISIS on it's soil but the group has claimed responsibility for some of the deadly attacks in Pakistan.

Orakzai is one of seven restive semi-autonomous tribal regions on the Afghan border, an area that has long been a focal point in the global war on terror and was famously described by Barack Obama as "the most dangerous place in the world".

Washington has said that the mountainous region provides safe havens to militants including the Afghan Taleban and Al-Qaeda - an allegation that Islamabad denies.

Multiple bloody military operations have been carried out in the area, officially known as the Federally Administered Tribal Areas (FATA) and home to around five million ethnic Pashtuns.

Security has improved in the region in recent years, though lower-level attacks are still carried out with devastating regularity, often targeting Shi'ites in the area.

But it remains notorious for the availability of cheap guns, drugs and smuggled goods. 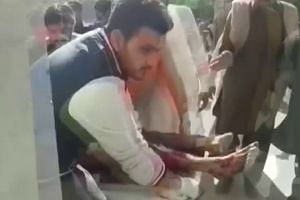 Bomb hidden in vegetables kills at least 31 in Pakistan market

Earlier this year, Pakistan passed legislation which paves the way for the tribal areas to be merged into neighbouring Khyber Pakhtunkhwa province, bringing them into the political mainstream.

The move will impose the Pakistani judicial system on a region still loosely governed by British colonial-era laws and the tribal system of honour, and which has always existed on the fringes of the state.