NEW DELHI (REUTERS) - Interpol has issued a red notice request to find and arrest fugitive Indian billionaire jeweller Nirav Modi, who is at the heart of a US$2 billion-plus (S$2.7 billion) bank fraud case, the international agency said on its website.

Federal police last month asked Interpol to issue a red notice to locate Modi, who has been charged in relation to India's biggest banking fraud.

Government-backed Punjab National Bank (PUB) earlier this year said that two jewellery groups headed by Modi and his uncle, Mehul Choksi, had defrauded it of about US$2.2 billion by raising credit from other Indian banks using illegal guarantees.

An internal probe by PNB found that the fraud might have been orchestrated by a few rogue employees, and it escaped detection because of widespread risk-control and monitoring lapses in many areas of the bank. 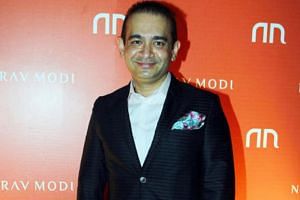 A red notice is a "request to locate and provisionally arrest an individual pending extradition", according to Interpol.