NEW DELHI - Dr Roshan Radhakrishnan has had the Zomato app on his phone for five years but has not used it, turning instead to other food delivery services like Swiggy and Uber Eats.

But the 38-year-old anaesthesiologist from Kochi has switched to Zomato in an act of solidarity with the firm.

The gesture comes amid the backdrop of a zealous debate on Wednesday (July 31) on Indian social media involving the firm after it refused to kowtow to an irate Hindu customer who refused to accept that food he had ordered would be delivered by a Muslim delivery rider.

The customer, Mr Amit Shukla, cancelled the order and took to Twitter to express his feelings after Zomato refused to change the delivery rider to someone better suited to his religious bias. "Just cancelled an order on @ZomatoIN they allocated a non hindu rider for my food they said they can't change rider and can't refund on cancellation I said you can't force me to take a delivery I don't want don't refund just cancel," he tweeted.

He had previously argued with a Zomato customer care executive indicating that he did not need a delivery from a "Muslim fellow" in the Hindu month of Shraavan, which is when many Hindus fast and worship their deity, Lord Shiva.

Responding to Mr Shukla's tweet, Zomato shot off a taut 10-word public riposte which went viral. "Food does not have a religion. It is a religion," it tweeted back to the customer. The tweet has so far got more than 83,000 likes and close to 27,000 retweets.

The firm's position was reinforced by Mr Deepinder Goyal, its founder, who earned additional plaudits for adding on Twitter: "We are proud of the idea of India - and the diversity of our esteemed customers and partners. We aren't sorry to lose any business that comes in the way of our values."

For many despaired by an entrenched religious chasm in contemporary India, this was an inspiring act of defiance that marshalled many supporters like Dr Radhakrishnan. "Most businesses refuse to take a stand against racism and bigotry in India. It is, therefore, so refreshing to see someone who is actually able to say no, this is not okay," he told The Straits Times, adding that he has even subscribed for the firm's special delivery programme as a show of support. 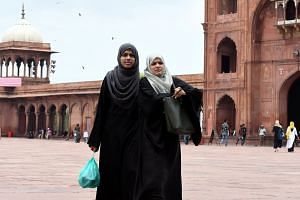 Dr Radhakrishnan was joined by many others who stood by Zomato. Even Mr P Chidambaram, who served as a senior minister in a Congress-led government, chipped in with his support. "I have not ordered food so far, but I think I will do so now from Zomato," he tweeted. Zomato's rival, Uber Eats lent its backing too, a rare public act of another firm standing in for a competitor in India. "@ZomatoIN, we stand by you," it posted on Twitter.

This display of support for Zomato has, however, been countered by a fierce backlash against the company, with many choosing to deactivate their accounts on the food delivery app. #IStandWithAmit trended as critics questioned its policy to preach that food has no religion when it condones the practice of delivering halal food. "Answer my question. Why is @ZomatoIN delivering Halal? If they can specifically deliver meat slaughtered by a Muslim to Muslims, they can provide non Muslim delivery boys too," asked someone who simply goes by the @ArmchairPseph handle on Twitter.

This was countered by those who argued that eating halal is akin to eating vegetarian food - an individual's choice - but that rejecting food simply because of the identity of the delivery personnel is negative social discrimination.

The Zomato incident was reported from Jabalpur, a small city in the state of Madhya Pradesh. The media there tracked down the delivery rider, who has been identified as Faiyaz. "This hurts me, but what can I do... we are poor people who are meant to put up with things like these," the Press Trust of India quoted him as saying. On the other hand, Mr Shukla, who describes himself as a "proud Hindu" and is a solar power consultant, has defended himself by arguing on Republic television channel that his act was an individual religious choice.

The debate continued to swirl online even on Thursday morning with associated hashtags such as #IDontStandWithAmit and #BoycottUberEats trending in India. This is not the first time an Indian firm has had to deal with religious bigotry online. Last year in June, Airtel, a telecom giant, received a lot of flak after it replaced a Muslim support executive with a Hindu one after a customer refused to deal with a Muslim employee.

Concerned by the widespread opposition to Zomato, commentator and political analyst Saba Naqvi thinks such blatant discrimination, seemingly legitimised by online support, could push smaller firms not to employ Muslims or others from a certain community as they are forced to find ways to placate and retain clients. "A climate where individuals like Amit Shukla proudly showcase their hatred suggests that in a shrinking job market, Muslims will find it even harder than others to find employment," she told The Straits Times.