NEW DELHI/MUMBAI • India yesterday reported more than 300,000 new Covid-19 cases for a 12th straight day to take its overall caseload to just shy of 20 million, as scientists predicted a peak in infections in the coming days.

With 368,147 new cases over the past 24 hours, India's total infections stand at 19.93 million, while total fatalities rose by 3,417 to 218,959, according to Health Ministry data. Medical experts say real numbers across the country of 1.4 billion may be five to 10 times higher than the official tally.

But the ministry offered a glimmer of hope, reporting that positive cases relative to the number of tests conducted fell yesterday for the first time since at least April 15.

India's virus cases may peak some time between yesterday and tomorrow, according to a mathematical model from a team of scientists advising the government, a few days earlier than a previous estimate as the virus has spread faster than expected.

Hospitals have hit full capacity, medical oxygen supplies have run short and morgues and crematoriums have been swamped as the country deals with the surge in cases. Prime Minister Narendra Modi's government is reluctant to impose a national lockdown, concerned about the economic impact.

Dr Bhramar Mukherjee, an epidemiologist with the University of Michigan, said on Twitter: "In my opinion, only a national stay-at-home order and declaring a medical emergency will help to address the current healthcare needs."

On Sunday, the New Delhi High Court said it would start punishing government officials if they fail to deliver oxygen by midnight yesterday (2.30am today, Singapore time) after hospitals in the capital successfully sought an injunction.

The verdict adds pressure on Mr Modi, who has been criticised for not acting earlier to curb the spread and for letting millions attend religious festivals and political rallies in five states in the last two months.

Several states have postponed widening a vaccination drive for adults that was to start on Saturday due to a lack of vaccines.

Despite being the world's biggest producer of vaccines, India does not have enough for itself - undermining a plan to ramp up and widen inoculation from Saturday. Only about 9 per cent of its 1.4 billion people have had a dose.

India has struggled to increase capacity beyond 80 million doses a month due to a lack of raw materials and a fire at the Serum Institute, the world's largest vaccine maker and the country's main supplier of Covid-19 shots. 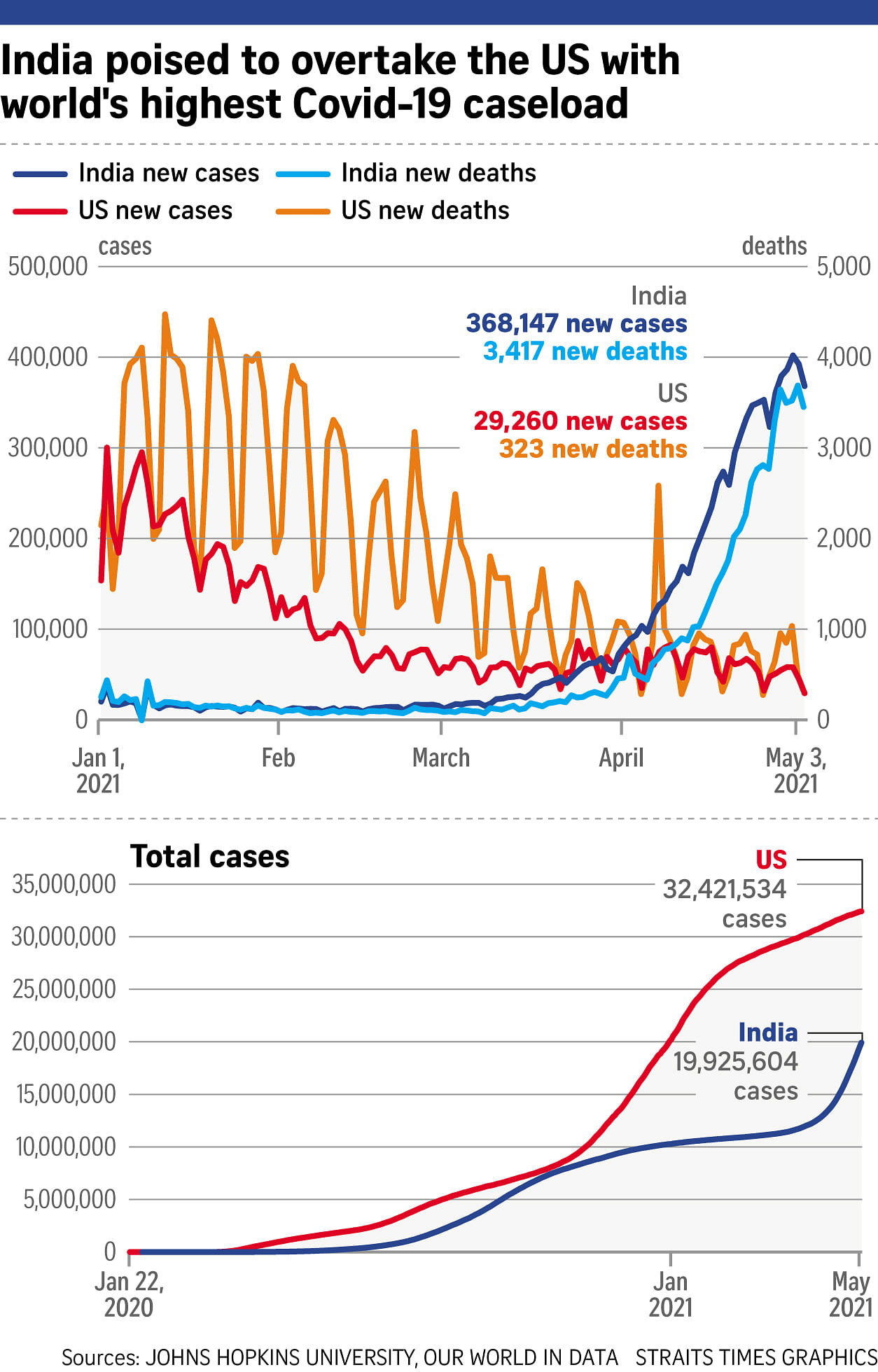 Another manufacturer, Pfizer, was in talks with the government for "expedited approval" of its vaccine, chief executive Albert Bourla said on LinkedIn, announcing a donation of medicines worth more than US$70 million (S$93 million).

Last month, India said its drugs regulator would hand down a decision within three days on emergency-use applications for foreign vaccines, including Pfizer's.

Government officials and manufacturers have passed the buck over the vaccine shortages in India, with Serum Institute chairman Adar Poonawalla accusing politicians and critics of maligning him when the government, not the company, was responsible for policy.

Sources have told Bloomberg that the federal government has not placed an order larger than 110 million doses from Serum Institute - enough for just 4 per cent of the population of 1.4 billion - since sales started in December.

Everybody really felt that India had started to turn the tide on the pandemic... There were no orders; we did not think we needed to make more than one billion doses a year.

The institute is racing to keep up with states' orders but its production facilities can produce only 60 million to 70 million doses a month, and can ramp up production to 100 million by July, said the person who declined to be identified.

"Everybody really felt that India had started to turn the tide on the pandemic," Mr Poonawalla told the Financial Times in an interview on Sunday. "There were no orders; we did not think we needed to make more than one billion doses a year."

The Indian Covid-19 variant, B1617, has reached at least 17 countries including Malaysia, Indonesia, Switzerland and Britain, leading several governments to close borders to people travelling from India.

Taiwan was the latest territory to bar the entry of people who have been to India over the previous 14 days, while returning Taiwanese face 14 days in centralised quarantine facilities. The travel ban begins today.

A version of this article appeared in the print edition of The Straits Times on May 04, 2021, with the headline 'Infections in India near 20 million as peak approaches'. Subscribe
Topics:
More
Whatsapp Linkedin FB Messenger Telegram Reddit WeChat Pinterest Print Copy permalink