NEW DELHI (REUTERS) - India's federal pollution regulator has warned coal-fired power plants around New Delhi that they could be shut down for failing to comply with deadlines to meet emissions standards, according to sources and a letter reviewed by Reuters.

The move comes as New Delhi and other nearby cities in north India have been struggling with some of the worst air pollution levels on earth, prompting local governments to shut schools and declare health emergencies this month.

The proposed action, if implemented, could be the strictest action yet on non-compliant utilities, which had already won an extension on a December 2017 deadline for power plants to meet emissions standards, after extensive lobbying by the industry.

A mass shutdown could lead to electricity shortages in and around the country's capital city, and it is not immediately clear how the government plans to ensure adequate electricity supply, if it follows through on the threat.

In a letter dated Nov 13 to the head of the Panipat Thermal Power Station (PTPS), which is run by the state government in Haryana - located north of Delhi - the India's Central Pollution Control Board's (CPCB) Chair cited a host of alleged violations, and gave it 15 days to show cause for non-compliance.

"PTPS, HPGCL, Haryana is hereby directed to show cause as to why the Unit-7 of the plant should not be closed in view of the non-compliance," CPCB chairman S.P Parihar said in the letter, reviewed by Reuters. HPGCL stands for Haryana Power Generation Corp Ltd.

India has a phased plan for plants to comply with emission norms, which involve installing Flue Gas Desulphurisation (FGD) units that cut emissions of sulphur dioxides. All plants in the National Capital Region - in and around New Delhi - have to comply by the end of 2019.

More than half of India's coal-fired power plants ordered to retrofit equipment to curb sulphur oxide emissions are set to miss deadlines, Reuters reported this month.

And nearly all the coal-fired units in the National Capital Region (NCR) are poised to fail to comply with next month's deadline, the Reuters analysis found. 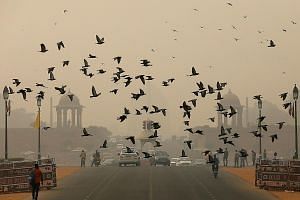 Battling India's air pollution: What's been done, and what more needs to be done

In addition to non-compliance to FGD norms, the letter also pointed out emissions of excess particulate matter, citing an inspection done by the board in October.

Separately, two senior officials at utilities operating in the National Capital Region told Reuters the CPCB has also warned them that they face shutdowns, if they are found non-compliant to norms.

One of the officials said the CPCB warned of "punitive action", which could include arrests of officials.