NEW DELHI (AFP) - A right-wing Indian woman who shot an effigy of independence hero Mahatma Gandhi with an air pistol to mark his assassination some seven decades ago has been arrested, police said on Wednesday (Feb 6).

Pooja Shakun Pandey was filmed shooting the effigy at an event by a far-right Hindu group on Friday - the 71st anniversary of Gandhi's death. The video sparked anger after going viral online.

Gandhi was assassinated on Jan 30, 1948, by Nathuram Godse, a Hindu fanatic angered by what he saw as Gandhi's pandering to Muslims and by the partition of India after independence.

Some present chanted Godse's name and people took turns firing at the effigy, which had a balloon inside that burst with red liquid resembling blood. It was then set on fire.

The event took place in the northern state of Uttar Pradesh and was organised by right-wing group Hindu Mahasabha, the same organisation to which Gandhi's killer was linked.

Pandey - a senior figure in the group and a former lecturer - was arrested on Tuesday on charges of stoking violence and rioting, a local police officer told AFP.

She was taken before a court and a judge remanded her in custody, the officer said.

Thirteen others from Hindu Mahasabha involved in the recreation of the killing, including her husband, have either been arrested or are on the run. 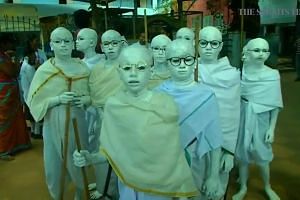 The organisation observes the anniversary of Gandhi's assassination as "Bravery Day" and organises public events to glorify Godse, who was hanged with a co-conspirator in 1949.

Gandhi's death led to nationwide outrage against the far-right group, pushing it to the fringes of Indian politics for many decades.

But the election of Hindu nationalist Prime Minister Narendra Modi in 2014 has emboldened the organisation to celebrate Godse's ideology.