Inspectors from the tax department, aided by armed policemen, raided nearly a dozen Gupta properties in their hometown of Saharanpur, the northern city of Dehradun and their company offices in the Indian capital.

The India-born Guptas, one of wealthiest business families in South Africa, are being probed over corruption charges by the African nation and their links to former president Jacob Zuma, who stepped down after multiple graft scandals.

A spokesman for the Indian Tax Department in New Delhi confirmed to AFP that properties in the three cities were raided but declined to confirm whether the crackdown was linked to the scandal in South Africa.

A second tax official in their home state Uttar Pradesh told AFP that they were acting on information that the brothers were bringing money illegally into India and violating tax laws.

"The raids were carried out today (Tuesday) after we received information that they were violating tax laws and were involved in money laundering," the official told AFP on condition of anonymity as he was not authorised to speak to the media.

The Gupta brothers - Atul, Ajay and Rajesh - moved to South Africa in 1993 from their hometown Saharanpur, where they are revered and enjoy massive popularity owing to their meteoric success and wealth. 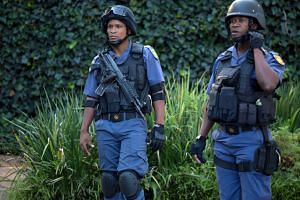 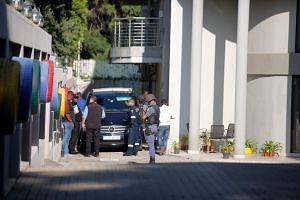 Gupta associates get bail as one brother becomes a fugitive

The Guptas are building a massive temple at a cost US$15 million (S$19 million) on a prime 2.8ha piece of land in their hometown.

Local media reports linked the raids to the source of the funding for construction of the temple.

Atul was declared a "fugitive from justice" by police after he did not respond to a summons.

Thirteen people are facing charges linked to allegations that millions of dollars of public money meant for poor South African dairy farmers was siphoned off by the Guptas.

They are also accused of receiving hugely favourable government deals during Zuma's presidency.