NEW DELHI - The extravagant wedding of an Indian politician's daughter has triggered an uproar in the country amid a cash flow crisis after the Indian government announced that it would scrap 500-rupee and 1,000-rupee notes.

The five-day wedding of Brahmani, the daughter of businessman and former Karnataka State Minister G. Janardhana Reddy, has been estimated to cost about US$74 million (S$104.68 million), with gold-plated invitations and Bollywood stars expected to perform, reported the BBC.

Critics have slammed the "obscene display of wealth" at a time when millions of Indians have been standing in long queues at banks and ATMs to exchange the redundant currency notes or withdraw cash. The ban on 500- and 1,000-rupee notes was intended to crack down on undeclared wealth.

Many have questioned how Mr Reddy - a former member of Prime Minister Narendra Modi's Bharatiya Janata Party (BJP) who was arrested on September 5, 2011, and spent four years in jail on corruption charges before being released on bail last year - managed to pay for the ostentatious nuptials.

But Mr Reddy has said that he mortgaged properties in Singapore and the Indian city of Bengaluru to raise money for the wedding and that all payments were made six months ago when the planning started. 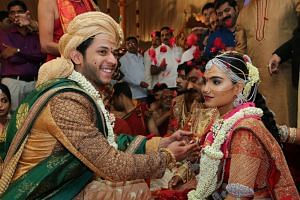 That did not stop angry Indian netizens from ridiculing the extravagance on social media, while Mr Reddy's political opponents have questioned whether Prime Minister Modi's drive against ill-gotten money would include the elite, the BBC reported.

Preparations for the wedding, which is being held at the sprawling Bangalore Palace, began months in advance, with eight Bollywood directors roped in to create sets that resemble ancient Hindu temples where the ceremonies would be conducted.

Luxury bullock carts will be used to ferry guests from the palace gates to the venue. Guests will dine at a village that was specifically created on the grounds for the wedding.