NEW DELHI (BLOOMBERG, REUTERS) - Mr V. G. Siddhartha, the man who founded India’s biggest coffee chain more than a decade before Starbucks Corp entered Asia’s third-largest economy, has been confirmed dead days after he purportedly wrote a letter indicating he was anxious about pressure from banks, investors and the tax authorities.

Mr Siddhartha went missing on Monday after he went for a walk near a bridge close to the southern Indian city of Mangaluru. He was reported missing after he failed to return to the car later that night.

"We found the body about half a kilometre from the sea," said Mr Ritesh D’Souza, 34, a local fisherman who helped retrieve Mr Siddhartha’s body. Authorities declined to say whether they were treating his death as suicide or foul play.

Coffee Day Enterprises, a company Mr Siddhartha founded, on Tuesday released a letter purportedly written by him to the board about "succumbing to the situation" because of pressure from lenders, one of the private equity partners, and harassment by tax officials.

The letter, printed on a white sheet of paper bearing Mr Siddhartha’s name boldly on top and Coffee Day’s address at the bottom, is addressed to the the company’s board and employees.

"I gave it my all but today I gave up as I could not take any more pressure from one of the private equity partners forcing me to buy back shares," according to the letter dated July 27.

The harassment by tax officials and pressure from lenders led to a "serious liquidity crunch." Representatives for Coffee Day said they couldn’t immediately comment.

Coffee Day shares plunged by the 20 per cent limit for a second day on Wednesday.

"His is the ugliest example of how agency persecution is wrecking India’s growth story," tweeted Congress politician Milind Deora. "Hope govt reflects on its anti-business policies!"

The government did not immediately respond to a request for comment on the opposition allegations. The Income Tax department issued a statement on Tuesday saying Mr Siddhartha had failed to disclose some income and it stressed that authorities’ actions were normal.

There were signs Mr Siddhartha and Coffee Day were struggling with debt.

He and other founders of Coffee Day pledged about 76 per cent of their holdings as collateral, according to filings.

The debt burden prompted him to start selling assets earlier this year. In April, he sold a 20 per cent stake in software services firm Mindtree to engineering giant Larsen & Toubro.

He was seeking a valuation of as much as US$1.45 billion (S$1.99 billion) from Coca-Cola Co to sell a stake in Coffee Day, the Economic Times newspaper reported last month.

The company is taking help from concerned authorities, and its leadership team will "ensure continuity of business", Coffee Day said in an exchange filing on Tuesday.

Shares of Sical Logistics, another company in which Mr Siddhartha’s family is a large investor, also plunged 20 per cent. Sical had total debt of 11 billion rupees (S$219 million) at the end of March, while loans at Coffee Day jumped 29 per cent from a year earlier to 65.5 billion rupees, according to data compiled by Bloomberg. 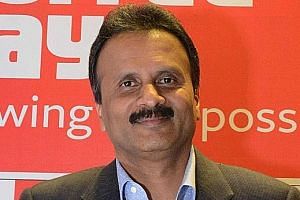 A unit of private equity firm KKR Co owns 6.07 per cent of the company, while Nandan Nilekani, co-founder of Infosys, has a 2.69 per cent stake.

Coffee Day has about 1,700 outlets, 10 times more than Starbucks runs in the nation, according to the National Restaurant Association of India.

"We are deeply saddened by the developments and our thoughts are with his family at this time," KKR said in an e-mail.

The fund sold 4.25 per cent of its holding of about 10.3 per cent last February and has not sold any shares before or since, according to the e-mail.

Mr Siddhartha, who began his career as an investment banker, had sleepless nights when Starbucks entered India, according to an article he wrote for the Outlook magazine in 2016.

He had a "miserable moment" when Coffee Day's stock tanked at its debut, giving him "quite an ego blow", he wrote in the column.