NEW DELHI/SRINAGAR (REUTERS, BLOOMBERG) - India’s Prime Minister Narendra Modi on Friday (Feb 15) promised a strong response to a car bombing in Kashmir that killed 44 paramilitary officers that his government blamed on Pakistan, ratcheting up tensions with the nuclear rival.

The attack on a military convoy in Jammu and Kashmir, where India has been battling an insurgency, was the worst in decades and comes just months before Mr Modi’s ruling Hindu nationalists face a tight general election.

“We will give a befitting reply, our neighbour will not be allowed to de-stabilise us,” Mr Modi said in a speech soon after he called his security advisers to consider a response to the attack that has provoked an outpouring of anger on social media and demands for retribution.

Finance Minister Arun Jaitley said earlier on that India would withdraw Pakistan's most-favoured nation status as well as take all diplomatic steps to ensure the "complete isolation" of its neighbour.

There was "incontrovertible evidence" of Pakistan's hand in the assault on Thursday, Mr Jaitley told reporters soon after a Cabinet committee met at Mr Modi’s residence. Those responsible will have to "pay a heavy price", Mr Jaitley said.

“The ministry of external affairs will initiate all possible steps, and I am here referring to all possible diplomatic steps which have to be taken to ensure the complete isolation from the international community of Pakistan,” he said.

But bilateral trade between India and Pakistan is barely US$2 billion (S$2.7 billion) per year and Mr Modi, facing a tough election, is likely to come under pressure for a more muscular response. 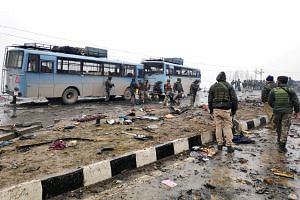 India summoned Pakistan’s envoy on Friday and served a diplomatic notice demanding Islamabad take action against the militant group that has taken responsibility for the attack, a government source said.

He took office in 2014 promising to tackle Muslim Pakistan, with which India has twice gone to war since independence from Britain in 1947.

Kashmir is a Muslim-majority region at the heart of decades of hostility between India and Pakistan.

The neighbours both rule parts of the region while claiming the entire territory as theirs. The last major attack in Kashmir was in 2016, when militants raided an Indian army camp in Uri, killing 20 soldiers.

Mr Modi responded with a surgical strike on suspected militant camps across the border in Pakistan Kashmir weeks later.

But in a brief statement early on Friday, it added: “We strongly reject any insinuation by elements in the Indian government and media circles that seek to link the attack to the State of Pakistan without investigations.”

The White House urged Pakistan in a statement “to end immediately the support and safe haven provided to all terrorist groups operating on its soil”. It said the attack strengthens US resolve to step up counter-terrorism cooperation with India.

Jaish-e-Mohammad, a Pakistan-based terror group, claimed responsibility for the attack that took place in Pulwama near the state capital Srinagar.

The deadly strike is the latest challenge for Mr Modi who is already battling a slide in popularity over rising concerns of lack of jobs, and could prompt New Delhi to launch a limited military strike to shore up support.

"Given the fast-approaching election and his increasing political vulnerability, he will be under tremendous pressure to resort to some type of muscular response."

New Delhi says Jaish-e-Mohammad has carried out attacks on Indian security forces in the past but Pakistan had refused to act.

"This terror group is led by the international terrorist Masood Azhar, who has been given full freedom by the government of Pakistan to operate and expand his terror infrastructure in territories under the control of Pakistan and to carry out attacks in India and elsewhere with impunity," India's foreign ministry said in a statement.

Pakistan's foreign ministry denied any role. "We strongly reject any insinuation by elements in the Indian government and media circles that seek to link the attack to the State of Pakistan without investigations," it said in a statement.

Mr Modi condemned the attack, which he described as "despicable" in a tweet on Thursday evening. "The sacrifices of our brave security personnel shall not go in vain."

The White House called on Pakistan to "end immediately the support and safe haven provided to all terrorist groups operating on its soil, whose only goal is to sow chaos, violence, and terror in the region".

The attack is bound to raise tensions in South Asia, in part because it comes in the lead up to India's general elections due by May, said Ms Alyssa Ayres, a senior fellow at the Council on Foreign Relations and former US deputy assistant secretary of state for South Asia between 2010 and 2013.

"The attack undoubtedly increases pressure on the Modi government to respond militarily, not only due to the upcoming elections, but as a question of national pride," she said, adding, "(It) suggests that there's not a lot India can do to improve its ties with Pakistan absent a government and military across the border willing to rein in terror."

The attack may also put pressure on China, a close ally of Pakistan, to alter its "indefensible position" at the United Nations Security Council, where Beijing has blocked India's attempts to list Jaish-e-Mohammed and Azhar as globally proscribed terrorists, Ms Ayres said.

Domestically, however, the assault on troops could present Mr Modi with a political opportunity ahead of his re-election bid, according to Mr Milan Vaishnav, director of the South Asia Programme at the Carnegie Endowment for International Peace.

Following the 2016 attack in Uri, Mr Modi's administration played up its cross-border strikes in state-level elections, and is likely to do the same thing if it chooses to respond militarily now, Mr Vaishnav added.

"It does set a possible pretext for a forceful response, which could have a 'rally round the flag' effect which could create a nationalist fervor that would bolster Modi's standing," he said.

"If the government mounts a forceful response now, there is zero doubt in my mind that it would become an important pillar of the BJP's (Bharatiya Janata Party) re-election campaign."

Indian senior government minister Arun Jaitley said in a tweet that those responsible "will be given an unforgettable lesson for their heinous act".

Both India and the US see Pakistan as providing safe haven for terrorist groups and often bring up the fact that the leadership of groups such as Lashkar-e-Taiba, which carried out the gruesome Mumbai attacks in 2008, still live freely in Pakistan.

However, since coming to power last year, Prime Minister Imran Khan and Pakistan's powerful military have attempted to push for peace with India - which has been seen with deep scepticism in New Delhi.

For years, both nations' armies have sporadically exchanged fire across the heavily militarised de-facto border in Kashmir known as the "Line of Control". For now, Mr Modi is unlikely to react by sending troops across the border, said Mr Sasha Riser-Kositsky, a senior South Asia analyst at New York-based Eurasia Group.

"Modi is most likely to authorise some sort of limited retaliation, such as artillery strikes, that burnish his image of strength without risking calls for retaliation on the Pakistani side and further dangerous escalation," he said in an e-mail.

"Failing to retaliate in any way is politically untenable."