NEW DELHI, INDIA (AFP) - India's women's minister on Friday (April 13) called for the death penalty for child rapists as nationwide outrage mounted over the brutal gang rape and murder of an eight-year-old girl.

Demonstrations were held in New Delhi and other cities as horrific details emerged of the murder of the Muslim girl, who was repeatedly raped while being held for five days in the city of Kathua in Jammu, including at a Hindu temple.

"I have been deeply, deeply disturbed by the rape case in Kathua and all the recent rape cases that have happened on children," the women and children's minister Maneka Gandhi said in a Twitter video message.

Gandhi said her ministry would seek an amendment to India's Protection of Children from Sexual Offences Act, "asking for the death penalty for rape on children below 12 years".

The killing has shaken the country in a way reminiscent of the fatal gang rape of a Delhi student on a bus in 2012 that made headlines around the world.

Rahul Gandhi, leader of the opposition Congress party, led a candlelight march late Thursday to the India Gate monument in Delhi - the site of mass protests after the 2012 attack - to highlight the "unimaginable brutality" of the latest killing.

"Like millions of Indians my heart hurts," Gandhi said at the midnight rally. "India simply cannot continue to treat its women the way it does."

"The women in this country are the victims of these crimes. Besides taking action in this case, we need to look at the... upbringing and education of men in our society," Singh told AFP.

Eight people have been arrested over the killing, including four police officers and a minor. All are Hindus.

The girl, whose identity was protected by a court order on Friday, was murdered in January in the northern state of Jammu and Kashmir.

According to the charge sheet, she was abducted by the minor and an accomplice.

The girl, who was forced to take sedatives and held captive for five days in a shed and a Hindu temple, was repeatedly raped by the juvenile and different men, including a police constable.

She was finally strangled and beaten with a stone. According to the charge sheet, one of the attackers raped her just before she died.

Jammu and Kashmir is India's only Muslim-majority state, but the Jammu region in the south, where the rape and murder took place, is Hindu-dominated. 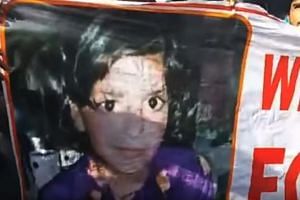 Renewed outrage over rape of 8-year-old girl in India

The case has heightened fears of communal tensions in the region. Muslim activists have demanded action against what they see as a crime against their community while some right-wing Hindu groups have argued that the accused were unfairly charged.

This week, a crowd of Hindu lawyers tried to stop police from entering a court to file charges against the accused men.

Prime Minister Narendra Modi, head of the Hindu nationalist government, has yet to comment on the case, but the Jammu and Kashmir chief minister, whose party is aligned with Modi's Bharatiya Janata Party, said the murder had "shamed humanity".

Separately, a senior BJP lawmaker in Uttar Pradesh state faces arrest over the rape of a 17-year-old woman. The alleged attack occurred last year but only started making headlines again after the woman tried to set herself on fire outside the state chief minister's residence last weekend.

High-profile names from the world of cinema and cricket joined the outrage over the Jammu crime in a country were nearly 40,000 rape cases are reported every year, according to official figures.

"What is happening to the world we live in???" Bollywood star Anushka Sharma, who is married to Indian cricket captain Virat Kohli, wrote on Twitter.

"These people should be given the most severe punishment there is! Where are we heading as humanity? Shaken to my core."

Cricketer Gautam Gambhir blamed India's "stinking systems" for what some have described as a rape epidemic.

"Come on 'Mr System', show us if you have the balls to punish the perpetrators, I challenge you," he tweeted.