Starting on Sunday (Sept 23), half a billion Indian citizens will be covered under an initiative that local media have dubbed "Modicare".

Although nobody seems to be sure whether it will work or how much it will cost, the government has touted it as the world's biggest government-funded health scheme.

Decades of explosive economic growth have brought new wealth to India, but the neediest of its people still lack basic services. The healthcare plan, targeted at the country's poorest 40 per cent, will be a key plank of Modi's campaign platform in national elections next year.

Experts say the political momentum behind the programme is unprecedented and promising. The British medical journal Lancet published an editorial praising its ambitious scope. "Setting up such a programme has undoubtedly required heroic efforts," it said.

There are fears, however, that new demand created by Modicare could place even greater strain on India's already stretched health infrastructure.

The programme gives poor families insurance of up to US$6,950 (S$9,480) in hospitals, a significant sum in India. For primary care - basic services usually provided by general practitioners or nurses - the government plans to open 150,000 "health and wellness" centres, staffed by nurses, traditional medicine healers and other health workers, by 2020.

The plan leans heavily on partnerships with private hospitals and will promote traditional ideas of holistic healthcare, such as incorporating yoga into daily routines.

"It's a very, very Indian programme," said Vinod K. Paul, a paediatrician turned government official and the programme's creator. He declined to say whether any aspect of it was modelled on healthcare systems elsewhere. 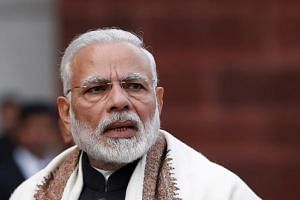 Paul said that most of the plan represents uncharted territory for the Indian government and that Modi had essentially signed a blank cheque to make it work. The final budget, he said, is difficult to pin down because nothing like this has been attempted before. The government has allocated US$4.8 billion for now, but the treasury has committed to providing more on request, he said.

Reforming healthcare in India is a mammoth task. According to a 2010 study, more than 63 million Indians fall under the poverty line every year because of health costs. In most states, government-funded hospitals are understaffed and ill-equipped, so many people end up paying for expensive private care.

On a recent afternoon last month at Safdarjung Hospital, a government facility in New Delhi, dozens of people were camped outside, bedding down on mattresses and plastic sheets for days while they or their family members were treated inside.

At Safdarjung, beds are in short supply, doctors work long shifts, and patients cry as surgery dates are delayed.

"We have been sleeping here for the past eight days," said Mamata Devi, a young mother who had travelled more than 24 hours by train to get to the hospital after her six-year-old daughter accidentally drank cleaning liquid. The child had been treated but needed follow-up care.

"When it rains, we sleep there," Devi said, pointing to a small roof at a side entrance to the hospital.

Devi spent about US$60 on travel from her village. Food costs her an additional US$3 a day. Her husband makes about US$4 a day selling utensils.

"We will spend the next year or two paying back the loan," she said.

Under the new programme, Devi's daughter might have been eligible for free treatment at a private hospital closer to home.

Moreover, government hospitals like this one stand to receive additional payments for every Modicare patient they treat, meaning that they might be able to upgrade their facilities.

Paul, the government official, said the health plan is focused on reducing "catastrophic spending" - when families have to spend more than a quarter of their incomes on health costs. In poor families, he added, that usually happens when a patient is hospitalised.

"If a rickshaw driver's wife gets cancer, he has no choice but to sell his rickshaw," he said.

Some experts say the programme focuses too heavily on hospitalisation and neglects primary healthcare - the basic general-practitioner services that many argue are the bedrock of a robust healthcare system.

Paul disputed that, saying that the government has a "profound commitment" to primary care. Nurses and practitioners of traditional Indian medicine will take "bridge courses" to enable them to provide services that include diagnosing some cancers and tuberculosis.

When diagnoses are complicated, healthcare workers can video-call a doctor for advice. Government-backed awareness drives and "people movements" on health issues such as nutrition will be added to existing services.

It's not an ideal situation, Paul conceded, but he predicted that new demand would create growth.

"Everybody knows we have to build our healthcare sector," he said, adding that the need to care for India's poor is urgent. "We can't wait for the perfect moment."

There are other potential hiccups. The government will pay public and private hospitals fixed rates for treating people covered under the programme. So far, 15,000 hospitals - a mix of government and private - have applied for government certification, Paul said.

But the government's rates are much lower than the prices that private citizens pay, experts said, and there is a shortage of applications from hospitals that can provide complex surgeries.

"Private hospitals are not happy but have accepted because the government has convinced them to help them with the launch, and then revise rates next year," said Srinath Reddy, an adjunct professor at Harvard University and president of the Public Health Foundation of India.

Paul said this is only a first step toward extending affordable care to the country's entire population, now estimated at more than 1.3 billion.

"These are difficult things that India's trying to do," he said. "But we want every poor person to be able to get treated. Isn't that your dream?"