In its editorial, the paper says the ability of some Rohingyas to get fake Bangladeshi passports undermines the country's image and security.

DHAKA (THE DAILY STAR/ASIA NEWS NETWORK) - As reported by the domestic and international media, dozens of stateless Rohingya individuals are being deported to Bangladesh from Saudi Arabia.

They allegedly went to the country with Bangladeshi passports, which they had obtained from smugglers who manufactured fake or counterfeit documents for them.

Some of them are now being sent to Bangladesh, having spent years languishing in jail, while some others still remaining there.

While Rohingyas are Myanmar's nationals by birth, the Saudi authorities have sent them to Bangladesh because they were carrying Bangladeshi passports.

The fact that foreigners have been able to obtain Bangladeshi passports so easily and even go abroad exposes the lacuna in the scrutiny process which poses a threat to our national security.

According to Henley Passport Index published recently, Bangladesh's passport has been ranked 97th in a tally of 190 nations.

Ensuring a robust scrutiny process for those seeking to obtain passports will alleviate the concerns of many developed countries. 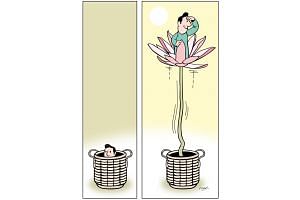 Time for Bangladesh to think out of the basket

In the process, citizens of Bangladesh will enjoy better chances of securing employment abroad, admission in foreign educational institutions and face less harassment at the hands of foreign authorities.

At a time when Bangladesh is attaining solid economic growth and is expected to become one of the 25 largest economies in the world by 2033, it's imperative that we focus on brightening our image on the global stage.

And, ensuring that the loopholes in issuing passports, which obviously exist as evident from this incident, are plugged, should be top priority.

The Daily Star is a member of The Straits Times media partner Asia News Network, an alliance of 23 news media organisations.