NEW DELHI (REUTERS) - A Hindu nationalist group close to Prime Minister Narendra Modi's party has urged him to resist pressure from the United States and not defer new regulations for the e-commerce sector, according to a letter seen by Reuters.

The economic wing of the group, Rashtriya Swayamsevak Sangh (RSS), which is the fountainhead of the ruling party, has written to Mr Modi saying that changing the policy implementation date, under pressure from Washington, will hurt 130 million small Indian entrepreneurs.

"There is no need to buckle under these pressures. India must continue to chart the way best for itself and the entrepreneurs," the Swadeshi Jagran Manch said in its letter, which was reviewed by Reuters.

The new rules, to be implemented from Feb 1, will deal a blow to Walmart Inc and Amazon.com's ambitions in the country.

They mandate that e-commerce companies will not be allowed to sell products from firms in which they have an equity interest.

Reuters reported on Thursday (Jan 24) the United States government had told Indian officials the new rules will hinder the investment plans of the two companies.

The rules, which will force the companies to change their business structures and raise operational costs, have sparked an extensive lobbying effort from both Amazon and Walmart, which last year invested US$16 billion (S$21.7 billion) in Indian e-commerce company Flipkart. 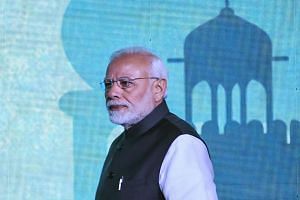 PM Modi reaches out to Indian diaspora ahead of polls 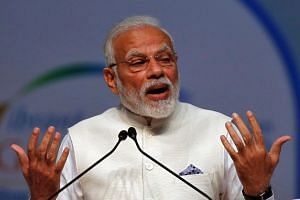 Both Amazon and Walmart have sought an extension of the Feb 1 deadline, but government sources have said that was unlikely to happen as Mr Modi needs millions of traders by his side in an upcoming national election due by May.

On Friday, the Confederation of All India Traders, which has supported tougher scrutiny of large e-commerce players, said, "the entire trading community will vote against the government if they extend the deadline".

The e-commerce spat is the latest in a number of disputes over trade and investment relations between India and the United States.

Walmart spokesman Greg Hitt told Reuters this week the company had "engaged the (United States) administration on this issue".

The RSS has long advocated self-reliance and opposed the opening up of the Indian economy to foreign players.

Small Indian retailers have alleged that e-commerce companies use their control over inventory from their affiliates to create an unfair marketplace that allows them to sell some products at lower prices, which hurts the businesses of brick-and-mortar retailers. Such arrangements would be barred under the new policy.