NEW DELHI (REUTERS, XINHUA) - As many as 150 people were feared dead in northern India after a Himalayan glacier broke and swept away a hydroelectric dam on Sunday (Feb 7), with floods forcing the evacuation of villages downstream.

The actual number has not been confirmed yet, but 100 to 150 people were feared dead, said Mr Om Prakash, Chief Secretary of Uttarakhand state, where the incident happened.

At least 10 dead bodies have been recovered so far, local authorities said.

State Chief Minister Trivendra Singh Rawat told media in state capital Dehradun that around 125 persons might be missing “though it’s not the final figure as work is in progress to get the exact numbers.”

A witness reported a wall of dust, rock and water as an avalanche roared down the Dhauli Ganga river valley located more than 500km in the state of Uttarakhand, north of New Delhi.

“It came very fast, there was no time to alert anyone,” Mr Sanjay Singh Rana, who lives on the upper reaches of Raini village, told Reuters by phone. “I felt that even we would be swept away.”

Locals fear that people working at a nearby hydro-power project had been swept away, as well as villagers roaming near the river looking for firewood or grazing their cattle, Mr Rana said.

“We have no idea how many people are missing,” he said.

Uttarakhand’s Police Chief Ashok Kumar told reporters more than 50 people working at the dam, the Rishiganga Hydroelectric Project, were feared dead though some others had been rescued.

State utility NTPC said Sunday’s avalanche had damaged a part of its Tapovan Vishnugad hydropower plant that was under construction further down the river. It gave no details but said the situation is being monitored continuously.

Mr Kumar also said authorities had evacuated other dams to contain the water rushing in from the flooded Alakananda river.

India has also put many of its northern districts on high alert.

Footage shared by locals showed the water washing away parts of the dam as well as whatever else was in its path.

Videos on social media, which Reuters could not immediately verify, showed water surging through a small dam site, washing away construction equipment.

“India stands with Uttarakhand and the nation prays for everyone’s safety there,” he said on Twitter, after speaking with the state’s  chief minister, Mr Rawat.

"Currently no additional water flows are being reported and there is no flood situation anywhere,” Mr Rawat said on Twitter. “No loss has been reported from villages along Alaknanda.”

India’s air force was being readied to help with rescue operations, the federal government said, while Home Minister Amit Shah said disaster-response teams were being airlifted in to help with relief and rescue.

Army soldiers have already been deployed and its helicopters were doing an aerial reconnaissance of the area.

The neighbouring state of Uttar Pradesh, India’s most populous, put its riverside areas on high alert.

#WATCH | A massive flood in Dhauliganga seen near Reni village, where some water body flooded and destroyed many river bankside houses due to cloudburst or breaching of reservoir. Casualties feared. Hundreds of ITBP personnel rushed for rescue: ITBP pic.twitter.com/c4vcoZztx1

It was not immediately clear what had set off the avalanche at a time when it is not the flood season. In June 2013, record monsoon rains in Uttarakhand caused devastating floods that claimed close to 6,000 lives.

Uttarakhand in the Himalayas is prone to flash floods and landslides. In June 2013, record rainfall caused devastating floods that claimed close to 6,000 lives.

That disaster was dubbed the “Himalayan tsunami” by the media due to the torrents of water unleashed in the mountainous area, which sent mud and rocks crashing down, burying homes, sweeping away buildings, roads and bridges.

Uma Bharti, India’s former water resources minister and a senior leader of Modi’s party, criticised the construction of a power project in the area.

“When I was a minister I had requested that Himalaya is a very sensitive place, so power projects should not be built on Ganga and its main tributaries,” she said on Twitter, referring to the main river that flows from the mountain.

Environmental experts called for a halt to big hydroelectric projects in the state.

“This disaster again calls for a serious scrutiny of the hydropower dams building spree in this eco-sensitive region,”said Ranjan Panda, a volunteer for the Combat Climate Change Network that works on water, environment and climate change issues.

“The government should no longer ignore warnings from experts and stop building hydropower projects and extensive highway networks in this fragile ecosystem.” 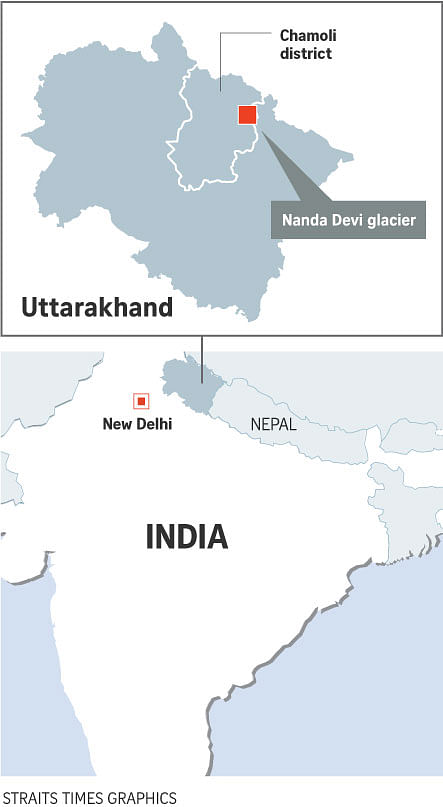 Melting away: Vanishing glaciers add to risks from climate change