MIRPURKHAS (AFP) - Distraught relatives gathered Friday (Nov 1) for the first funerals of some of the 74 people killed when fire ripped through a crowded train in Pakistan, with many of the victims residents of a single town.

Sobbing family members crowded an official building in Mirpurkhas overnight as the first bodies covered in white cloth began arriving by ambulance from the scene of the disaster.

After morning prayers, with women watching from nearby rooftops, more than a hundred men attended the first funeral - for a car mechanic named Mohammad Saleem, who was in his late 40s.

It was held at the Bismillah Mosque, from which at least 42 pilgrims had left to board the train one day earlier bound for a religious festival near Lahore.

Officials said that as some of the train's passengers cooked breakfast around dawn  on Thursday, two of their gas cylinders exploded, sending flames racing through three carriages as the train passed near Rahim Yar Khan, in Punjab province.

At least 74 people died, some after jumping through windows on the still-moving train to escape the blaze. Local media reported that rescue officials found bodies and some injured people along a 2km stretch of track.

Dozens more were wounded and rushed to nearby hospitals.

One of the carriages - Wagon No.12 - was carrying mainly people from Mirpurkhas, the town's deputy commissioner Attaullah Shah told AFP.

"There was never such a tragic incident to happen to Mirpurkhas," he said. 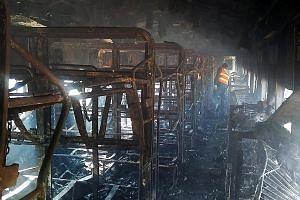 Eight of the bodies had been confirmed as being residents of the town so far, he said.

Twenty-four Mirpurkhas residents were among the injured.

But at least another 40 are still missing, he said.

Officials in Rahim Yar Khan have said many of the bodies are charred beyond recognition and will have to be identified through DNA testing - a process that could take up to one month.

Mr Shah said the government was arranging to send families of the missing from Mirpurkhas to the hospital in Rahim Yar Khan where the bodies have been taken.

Mirpurkhas, a town of some half a million people surrounded by farms and mango orchards, was largely shut down Friday as businesses closed in mourning.

"We can not ever forget them," Mr Mohammad Anwar, the 57-year-old headmaster of a government school, told AFP at the Bismillah Mosque.

He said that among the missing was his nephew, as well as the mosque's imam. Most of those who left from the mosque had known one another or lived nearby.

Clutching a photograph of his brother, the 23-year-old described rushing home after hearing of the accident.

"I consoled my father, and my mother and sisters were crying," he said.

Train accidents are common in Pakistan, where the railways have seen decades of decline due to corruption, mismanagement and lack of investment.

Gas cylinders are supposedly banned on trains. Pakistan's railways minister Sheikh Rasheed Ahmed said Thursday that it had been a "mistake" to allow the cylinders on board, and Prime Minister Imran Khan has ordered an inquiry.

The train was the Tezgam, a daily express service that runs back and forth between the southern port city of Karachi and Rawalpindi, adjacent to Islamabad.

But it was being diverted Thursday to carry pilgrims to the annual Tablighi Ijtema, one of Pakistan's biggest religious gatherings, which sees up to 400,000 people descend on a tented village outside Lahore for several days to sleep, pray and eat together.