NEW DELHI (BLOOMBERG) - Roughly 900 million registered voters will begin heading to the polls this week as India begins a marathon, six-week general election that will determine the course of the world's second-most populous country.

Prime Minister Narendra Modi is seeking re-election under more favourable conditions than just a few months ago, when rising concerns about a lack of jobs had put his government on the back foot, and polls showed slumping support for his ruling Bharatiya Janata Party.

But in late February, Mr Modi's government authorised airstrikes against Pakistan in response to a terrorist attack in Kashmir, generating a wave of nationalist sympathy. One survey found 43 per cent of those polled wanted Mr Modi to return as prime minister, up nine percentage points from last year. His party's ruling coalition is expected to win with a reduced majority.

But India's vast size and diversity make its elections tough to follow - and nearly impossible to predict. Here are five key places to watch.

The crucial state of Uttar Pradesh, along with the other densely-populated north Indian provinces of Rajasthan, Bihar and Madhya Pradesh, will largely determine the fate of this election. The states have a combined population of nearly half-a-billion people.

Uttar Pradesh, with a population of more than 200 million, is the country's most politically important state and it's often said the path to the prime minister's office cuts through the province. Together, these states are often called India's Cow Belt: home turf for conservative Hindu voters who make up a sizable chunk of India's population. 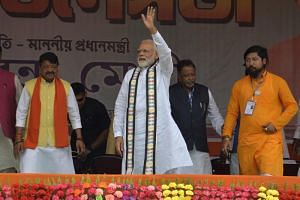 In 2014, the BJP won its powerful mandate by sweeping these four key states: winning 71 of 80 seats in Uttar Pradesh, all 25 seats in Rajasthan, 27 of 29 states in Madhya Pradesh and 22 of 40 seats in Bihar. Analysts say it's going to be nearly impossible to replicate that success.

In state elections in December, the opposition Congress defeated BJP administrations in Rajasthan and Madhya Pradesh. And in Uttar Pradesh, two powerful regional parties have teamed up against the BJP. If Mr Modi's party loses a significant number of seats here, it will struggle to piece together a majority, leaving it with no choice but to lean on coalition allies.

The restive state of Kashmir, divided between India and Pakistan but claimed in full by both, plays an outsize role in India's politics and foreign policy. Despite a small population and marginal economy, the state has been the primary battleground for the broader India and Pakistan geopolitical rivalry.

Details are sketchy amid claim and counter-claim, but the stand-off unquestionably darkened India's political mood ahead of the election, displacing economic woes as the main topic of debate. Mr Modi's party has been playing up its tough response.

The ruling party hopes to compensate for potential losses in northern India by focusing on India's eastern states - particularly West Bengal and Odisha. The BJP has less traction here, but analysts expect them to fan religious tensions to unite the Hindu vote in a region with millions of Muslims. 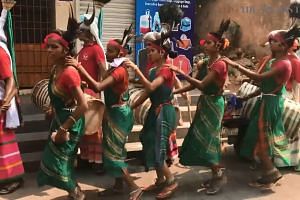 Facebook says has made headway against abuses ahead of India election

Her All India Trinamool Congress won 34 of the state's 42 seats in 2014, and a repeat performance could make her a potential king-maker in the alliance of opposition parties. The BJP is going hard for the state: Mr Modi drew a crowd of thousands in Kolkata on April 3 and an ABP News-Nielsen poll suggests the BJP could win eight seats this time compared to just two in 2014.

In Odisha, on India's eastern coast, the BJP hopes to peel away seats from a regional party that won 20 out of 21 seats last time around. But potential gains in the east are unlikely to fully compensate the BJP for losses in India's heartland.

Mr Modi has once again chosen to contest the election from the holy city of Varanasi, also known as Benares. The Hindu nationalist politician's decision is highly symbolic: The city is revered throughout India and is renowned for its Hindu temples along the sacred Ganges.

The prime minister's choice also signals the importance placed on Uttar Pradesh. With rising criticism about his government's record on jobs, some expect Mr Modi and other BJP politicians to lean more heavily on Hindu nationalist talking points - including the protection of cows and the construction of a controversial temple.

One of Mr Modi's successes has been expanding the BJP's base from the Cow Belt to other parts of the country. That includes seven northeastern states that lie sandwiched between Bangladesh on one side and Myanmar and China on the other.

In the state of Assam, however, where immigration from neighbouring Bangladesh is a big issue, the state's BJP administration has inflamed tensions with a draft law that might disenfranchise Muslim migrants while protecting Hindus and Christians. That's prompted protests in Assam and in other northeastern states that could endanger the BJP's inroads in this remote region.