NEW DELHI (REUTERS) - At least five million Indians lost their jobs between 2016 and 2018, and young urban men are being hit hardest, a Bengaluru-based private university said in a report on Tuesday (April 16).

The report by the Azim Premji University comes as Indians are voting in a staggered general election, which is due to end on May 19, with Prime Minister Narendra Modi's government keen to defend its economic record, including on jobs.

"In addition to rising open unemployment among the higher educated, the less educated (and likely informal) workers have also seen job losses and reduced work opportunities since 2016,"said Mr Amit Basole, an economist and lead author of the report.

The report did not say how many jobs were created during the period.

The introduction of a national sales tax the following year compounded difficulties for some businesses.

The unemployed were mostly higher educated and young people, in the 20-24 age range, according to the study, titled State of Working India 2019. 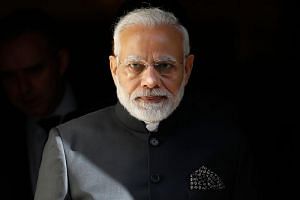 Mr Modi has faced criticism for not doing enough to create jobs for millions of unemployed young people despite official annual economic growth of about 7 per cent for the past five years.

An official survey that the government withheld showed unemployment rose to its highest level in at least 45 years in 2017/18, the Business Standard newspaper reported in February.

The report suggested the next government should consider an urban employment guarantee scheme to create jobs, build infrastructure and provide services.

India has a rural jobs guarantee programme, launched in 2006, which offers work to about 70 million rural people at the minimum wage for 100 days a year.

"India is at a crucial juncture in its economic development where timely public investment and public policy can reap huge rewards," Mr Basole said.