A Bulgarian climber also died on adjoining Mount Lhotse as he was descending, government officials said, and an Indian soldier died on nearby Mount Makalu.

Ravi Thakar, 28, was found dead inside his tent at Everest Camp 4 at an elevation 7,920 metres on Friday morning as his team was resting after a successful summit.

"Efforts are underway to bring his body back," Mingma Sherpa of Seven Summit Treks told AFP.

A day earlier his team lost an Irish member, Seamus Lawless, 39, when he slipped from below the "balcony" area at around 8,300 metres.

Sherpa said that guides have intensified their search for him.

The two were part of an eight-member team that included Saray Khumalo, who became the first black African woman to summit Everest. 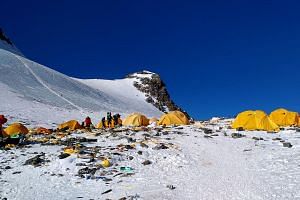 Major cleanup of Everest aims to bring back 10,000kg of garbage, bodies of dead climbers

The Indian soldier, 35, from the Indian Army's expedition to Mount Makalu died at around 8,200 metres as he was returning from the summit.

The team was in the news last month after tweeting a picture of "yeti" footprints, sparking ridicule and jokes online.

Another Indian climber also went missing on Mount Makalu on Thursday night as the team the 52-year-old was with was descending.

"The weather was not good and he probably lagged behind. A search team this morning could not find him, but we will keep looking," Sherpa said.

Many Himalayan mountains - including Everest - are at peak climbing season, with the window of good weather between late April and the end of May.

The death toll is already mounting, however.

On Wednesday two other Indians died on Mount Kanchenjunga, the world's third-highest peak, with one Chilean missing.

A Malaysian died in April after being rescued from Annapurna, where he spent two nights in the open near the summit.

Hundreds of climbers flock each year to Nepal - home to eight of the world's 14 highest peaks - creating a lucrative mountaineering industry for the impoverished country.