MUMBAI, INDIA (NYTIMES) - In many countries, Facebook is contending with a darkening reputation as a vehicle for disinformation and false news. The most recent example: Sri Lanka.

This week, the island country sought to block access to the social network, as well as two other platforms that Facebook owns, WhatsApp and Instagram, in an attempt to stem mob violence directed at its Muslim minority.

"These platforms are banned because they were spreading hate speeches and amplifying them," Mr Harindra B. Dassanayake, a government spokesman, said in a phone interview on Thursday.

Sri Lanka's government has also imposed a nationwide state of emergency after violence broke out Sunday in one of the island's central cities, where dozens of Muslim businesses, houses and at least one mosque were attacked. At least one person was killed.

Sri Lanka is the latest country to grapple with hate speech being magnified on Facebook.

As use of the social media platform has ballooned in recent years, so have cases of extremist fringe groups using Facebook's reach to magnify their messages.

Riot-hit Sri Lanka steps up security ahead of Friday prayers 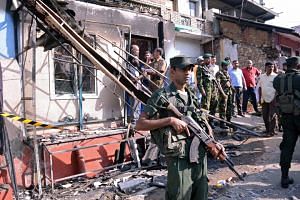 Internet watchdog groups have long warned that Facebook was being used to distribute hate speech about ethnic minorities in Sri Lanka.

Freedom House, a Washington-based non-profit that advocates for free speech and democracy, said in a recent report that "hate speech against minorities continues to foment on various social media platforms, particularly Facebook".

"Some attacks that have actually not taken place are being reported. It spreads that we are being attacked and we have to respond," Mr Dassanayake said.

In some cases, people were also sharing information on how to make simple bombs, he said.

"I strongly condemn the recent acts of violence & everyone involved must be brought to justice regardless of race/religion or ethnicity," Mr Jayawardena tweeted on Wednesday.