MUMBAI (AFP) - India's Jet Airways was fighting multiple crises on Wednesday (March 20) after grounding six planes, leaving it with only a third of its fleet flying, while pilots have threatened to walk out and a major shareholder is reportedly looking to offload its huge stake.

The problems at India's number two carrier come as other airlines struggle to turn a profit despite the sector rapidly expanding in the country over recent years.

Jet, which employs more than 20,000 people, is gasping under debts of more than US$1 billion (S$1.35 billion) and has now been forced to ground a total of 78 of its 119 aircraft after failing to pay lenders and aircraft lessors.

In a statement late on Tuesday announcing its latest grounding, the firm it said it was "actively engaging" with lenders to secure fresh liquidity and wanted to "minimise disruption".

"@jetairways We book our flights in advance so that we save on travel cost and you are sending cancellation (message) now?", read one irate tweet on Wednesday.

"I have sent a DM (direct message) regarding my ticket details. Please respond!", said Sachin Deshpande, who is a design engineer according to his Twitter profile.

Another, Ankit Maloo, wrote: "Received an e-mail for all together cancellation of flight days before departure without any prior intimation or communication over phone!"

The firm is also facing pressure from its many pilots who have not been paid on time, with unions threatening they will walk off the job if salaries do not arrive soon. 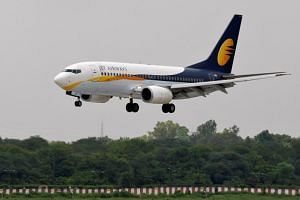 Jet Airways shares rise after report of chairman stepping down

"Pilots will stop flying jet planes from 1st April 2019 if the company does not disburse due salaries and take concrete decisions," a spokesperson for the National Aviator's Guild, a pilots union, told AFP.

India's aviation regulator on Tuesday warned Jet Airways to ensure that staffers facing stress are not forced to operate flights.

Meanwhile, Bloomberg reported that Etihad Airways of the United Arab Emirates has offered to sell its 24 per cent stake in Jet to State Bank of India (SBI).

A collapse would deal a blow to Prime Minister Narendra Modi's pragmatic pro-business reputation ahead of elections starting on April 11.

India's passenger numbers have rocketed six-fold over the past decade, with its middle-class taking advantage of better connectivity and cheaper flights.

The country's aviation sector is projected to become the world's third-largest by 2025.

But like other carries, Mumbai-based Jet has been badly hit by fluctuating global crude prices, a weak rupee and fierce competition from budget rivals.

Alarm bells for Jet first rang in August when it failed to report its quarterly earnings or pay its staff, including pilots, on time. It then later reported a loss of US$85 million.

In February, it secured a US$1.19 billion bailout from lenders, including SBI, to bridge a funding gap, but the crisis has since deepened.

"Jet Airways is rapidly reaching a point of no return and running out of assets to keep itself afloat," Mr Devesh Agarwal, editor of the Bangalore Aviation website, told AFP.

"The only solution is equity expansion by diluting its stakes, but Jet is just trying to cut losses and running out of options," Mr Agarwal said.

Shares in Jet Airways were down more than five per cent on Wednesday.