NEW DELHI - What went wrong in India on the Covid-19 front?

Quite simply, people were confused by the contradictory messaging because mass gatherings were taking place, even as officials were threatening lockdowns and pleading with residents to stay indoors unless absolutely necessary.

The Kumbh Mela, a religious gathering that takes place every 12 years, went ahead as planned in Haridwar, attracting millions of devotees as the authorities struggled to enforce safety measures.

A second Covid-19 wave sweeping across India, which has seen the country overtake Brazil as the second-worst hit in the world, appears to be more infectious this time around.

India registered a record one-day high of 184,372 new coronavirus cases, according to data released on Wednesday (April 14), taking the total number of cases past 13.8 million.

The authorities have been taken by surprise at the number of new daily cases - now nearly double that of the peak of 96,000 last September during the first wave.

As the federal government rushes to vaccinate the most vulnerable with a new urgency, experts are scrambling to understand the nature and trends of the second wave.

Professor K. Srinath Reddy of the Public Health Foundation of India said: "Variants (of the coronavirus) are accelerating but it doesn't matter which variant it is at this point.

"I know full well that by wearing a mask and avoiding crowds, whether original or variant, it (Covid-19) will be stopped.

"Action can be taken on what we know."

But the lockdown allowed the country to effectively tackle the virus, including by building up its capabilities from ramped-up testing, which went from fewer than 100 to over 1.4 million per day, and adding facilities for treating patients.

Poll-bound states, too, are grappling with surging cases.

West Bengal state, which is in the middle of an eight-phase election, has seen a fourfold increase in cases over the past two weeks. It registered a single-day high of 4,817 on Tuesday.

Political parties, in the meantime, have been holding massive rallies amid an intense and even violent election.

The increase in cases and growing pressure on the federal and state governments have led to some cracks in the effort to mount a unified battle against Covid-19.

The federal government, in turn, faced questions about vaccine shortages.

For now, Prime Minister Narendra Modi, whose government has denied any vaccine shortage, has ruled out a countrywide lockdown with an eye on economic recovery.

States have been asked to focus on boosting vaccination drives, implementing night curfews and improving testing. Experts believe the most effective measure would be to shut down all mass gatherings for a start. 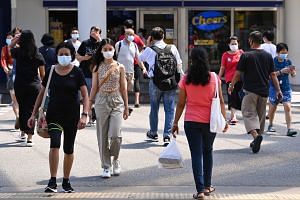