HIVARGAON/MUJAHIDPUR, INDIA (REUTERS) - A spike in the price of onions has led to the ouster of governments in Indian elections in the past. Now, prices of the staple have collapsed, and many impoverished farmers are saying they will make Prime Minister Narendra Modi pay in next year's general election.

Steep drops in recent weeks in the prices of onions and potatoes, both staple foods for India's 1.3 billion people, have badly hit the rural economy in large states.

In interviews with dozens of farmers last week, Reuters reporters found resentment welling against Mr Modi's Hindu nationalist Bharatiya Janata Party (BJP) for not helping support incomes in the countryside, where a majority of the population lives.

"Whatever they do in the coming months, I will vote against the BJP. I won't repeat the 2014 mistake," said Mr Madhukar Nagare, an onion grower from Nashik in Maharashtra state, referring to his backing the BJP at the last general election.

In the 1998 state elections, a sharp spike in onion prices led to the fall of the BJP government in the capital New Delhi.

In recent weeks, loss-stricken farmers have staged protests, blocked highways and dumped onions on the road after prices plunged to as low as one rupee (2 Singapore cents) per kg for a crop that costs about eight rupees a kg to produce.

But because of large cuts taken by middlemen, consumers have not benefited from the low prices. 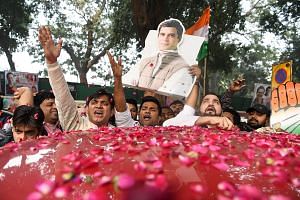 In Maharashtra, the top onion producing state, farm prices have fallen by 83 per cent, dragged down by surplus supplies from the previous season's crop and lower export orders from the Middle East and South-east Asia.

And in India's most populous state of Uttar Pradesh, which was crucial in Mr Modi's election win in 2014, there is a similar problem with low potato prices.

Maharashtra and Uttar Pradesh are both dominated by rural voters and together send 128 lawmakers to the 545-member lower house of Parliament. It means that big losses in these two states could either see Mr Modi lose the next election which is due by May or his party being forced to form a coalition government.

Farmers say shortcomings in a government crop support programme and weak overseas demand have combined to produce the current glut of onions. And as prices plunged, fertiliser and crop nutrient costs rose, thanks in part to a weak rupee.

Perhaps most important of all, the BJP came into office in 2014 determined to shift away from subsidies. That may have been fine when crop prices were relatively high, but as they crashed, it has exposed the party in farm areas.

The prime minister's office did not respond to a request for comment on this story.

Many farmers blame Mr Modi for not fixing a price protection programme which barely covers 7 per cent of India's 263 million farmers, leaving most growers at the mercy of middlemen.

They also criticise him for not setting up more food processing and cold storage facilities, which would allow them to store their crops without having to sell immediately after the harvest.

"Expecting good days, as promised by Modi, we voted for the BJP, but now we are going through the worst phase," onion farmer Madhav Pawase said, pointing to his rotting crop stocked in a temporary shed in Hivargaon village, about 230km north-east of Mumbai, India's financial hub.

"I've spent more than 80,000 rupees to produce 15 tonnes of onions from my two acres of land, but I won't recover more than 3,000 rupees at the current market price," he said.

Some farmers have decided to let onions rot in the field, saying that harvesting and transporting the produce to wholesale markets would only add to their losses.

The BJP was defeated by the opposition Congress party in three major states in local elections this month because of rural anger, and Mr Modi's government is under pressure to come up with measures to placate farmers.

Congress wrote off farmers' loans in the three states which it won and has demanded the federal government do the same across the country.

Although the BJP has so far not commented on the issue of farm loan waivers, Mr Rajiv Kumar, the head of government think-tank NITI Aayog, has said that writing off debt is not the solution for the problems of the farm sector.

Mr Syed Zafar Islam, a spokesman for the BJP, said the government had initiated a number of steps to help farmers get remunerative prices, including a project to electronically provide farmers with real-time market prices and help them directly sell to buyers, eliminating middlemen.

"It's an ongoing process and the results will not just start reflecting in four years," he said.

In a sign that the Modi administration is beginning to take the crisis seriously, the government on Friday (Dec 28) doubled export incentives for onion farmers to 10 per cent.

The move will result in better prices for onions in the domestic market, the government said in a statement.

In Mujahidpur village of Uttar Pradesh, India's biggest potato growing state, farmers lamented that prices have dropped by 86 per cent to 2,500 rupees a tonne.

"I lost my entire investment of 100,000 rupees to grow potatoes on one hectare," said Mr Gopi Chand, 55, sitting next to bright yellow mustard fields.

He said he and some other farmers in the area had dumped potatoes in favour of growing mustard.

Prices of crop nutrient diammonium phosphate, popularly called DAP, have gone up by 400 rupees to 1,450 rupees for a bag of 50kg, said Mr Babloo Singh in Mujahidpur village. DAP rates have gone up because of higher overseas prices and India's weaker currency.

"Higher input costs and record low potato prices have left us in deep debt," said Mr Singh. "The situation would have been different had there been more cold storage facilities and food processing plants in our state."

The crash in vegetable prices hasn't helped consumers either, thanks to the chain of middlemen.

In Lasalgaon, the country's largest onion trading hub, most farmers are selling their produce at 2 rupees a kg. But consumers in Mumbai are still shelling out 20 rupees. Between Lasalgaon and Mumbai, a distance of 220km, traders say onions pass through at least four layers of middlemen, adding a hefty margin at every stage.