KARACHI (BLOOMBERG) - An attack on a diplomatic mission in Karachi last week shows the risks that Chinese businesses face as they expand across Pakistan in the face of growing resentment over Beijing's influence in the economy.

As Pakistan becomes more indebted to China and an economic crisis worsens, anger is brewing among locals. Pakistani businesses say they are being sidelined in state projects and complain that Chinese companies get preferential treatment from a government desperate for foreign money.

The hostility has now taken a violent turn.

Prime Minister Imran Khan said the perpetrators are trying to scare off Chinese investors and undermine the government's recent trade deals with Beijing.

Terror attacks in Pakistan have long been a concern for foreign investors. With Chinese workers and businesses becoming a more visible presence in the country in the past five years, Pakistan has a military force of more than 15,000 to protect them.

Beijing has become increasingly vocal over the risks in Pakistan and has asked Mr Khan's government to take more measures to protect its citizens following the Karachi raid.

Much is at stake for Pakistan, which is seeing a second wave of Chinese investment as businesses follow the path paved by President Xi Jinping's flagship Belt and Road Initiative. 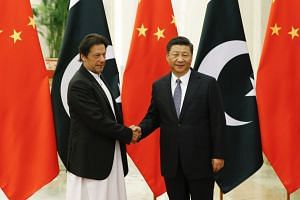 Was Imran's visit to China a failure?: Dawn contributor

China has been the top investor in Pakistan for the past five years, growing its share of total foreign direct investment to 52 per cent in the year through June from less than 10 per cent five years ago.

The United States and United Kingdom have kept investment relatively steady in that time.

With a young and growing population of more than 200 million and natural resources like coal and copper deposits, Pakistan is a lucrative bet for Chinese investors, who have overlooked security problems and a balance-of-payments crisis that is pushing Islamabad towards another bailout from the International Monetary Fund.

Mr Donald Skinner, group secretary at CLSA, which is owned by Beijing-based Citic Securities, said there is growth potential in Pakistan's stock market even with a slowing economy and a currency that has lost more than a fifth of its value this year.

"We need to bring Pakistan up to Chinese standards," said Mr Hyman Long, an executive at China's Changsha PanRan Commerce and Trade. "There will be a time when just like China everything is manufactured in Pakistan."

Local businesses are growing wary though, resentful of Chinese investors who are often able to sidestep much of Pakistan's stifling bureaucracy and win tax breaks and duty-free access to imports.

The Competition Commission of Pakistan stepped in this year to ask the nation's road authority to give domestic companies the same treatment as Chinese competitors.

Mr Rashid Siddiqi, executive director for administration at the Pakistan National Shipping, said the company has missed out on the Belt and Road boom, with China shipping all cargoes through its own state firm.

"It has to be two-way traffic - we have the vessels and we have not been involved," he said.

Chinese investors are also contending with a foreign-exchange crunch. Mr Wang Xianfeng, deputy general manager at the Chinese-built Port Qasim coal power plant - built on the edge of the Arabian sea - said Pakistan is five months behind with payments for electricity that the 1,320 megawatt plant started generating last year.

"Problems do exist," Mr Wang said. "I'm hoping in the near future they can solve these."