Some women starting to assert their identity even while many still lack state, social support

Ms Shabnam Alvi, 29, pulls up an old photo of her on the phone. She was 15 when it was taken. With her hair cascading over her right shoulder and flawless skin, the teenage Ms Alvi tilts her head slightly in the picture and rests her chin on her right hand.

But instead of fondly recollecting her younger self, Ms Alvi disowns the girl in the picture. "I am not this person. This is who I am," she said, pointing at her disfigured face, without a wince of regret in her voice.

In 2005, her former employer threw acid on her face, disfiguring it beyond recognition. He was angry that she had rejected his sexual advances.

Following the attack, Ms Alvi confined herself to her house for seven years so that outsiders would not see her face. "I spent those years as if this world was not made for me," she said.

But today, empowered by her family's support and a job at a cafe in Agra that employs acid attack survivors, she asserts her identity with confidence as well as pride.

"My life ahead is one that I have to live to the fullest. I don't have to break the courage I have put together," she added.

The fortitude of Ms Alvi, like many other acid attack survivors who have reclaimed their honour, is the subject of a new Bollywood release, Chhapaak. The film is based on the life of Ms Laxmi Agarwal, a survivor who, undeterred by an assault on her, went as far as the Supreme Court to secure justice.

Following her public interest litigation in 2006, the court issued a number of important orders, including amending the Indian Penal Code to introduce a section that deals exclusively with acid attacks and asking for a strict regulation on acid sales.

Still, such attacks continue, largely because of the easy availability of acid, which is often used as a toilet cleaner, and a poor record of prosecuting perpetrators.

There were 240 victims of acid attacks in India in 2018, according to government data, a slight decline from 252 in 2017. The actual number of victims could be much higher. "There are many who are still scared to come out," said Ms Bala Prajapati, 24, another survivor who works at Sheroes' Hangout, the cafe in Agra. "They too should come out and fight for their rights, like we have."

Ms Prajapati has a role in the new film; she plays one of the friends of the main character, portrayed by actress Deepika Padukone, and hopes it will have a positive effect on how people perceive survivors.

"Many don't even know that acid can ruin a girl's life."

Since the attack on her in 2012, Ms Prajapati has undergone 12 operations, including skin grafts, nose and eyelid reconstruction and a hair transplant. This has cost her family far more than the 500,000 rupees (S$9,500) compensation she received from the state in 2016.

Mr Ashish Shukla, the director of Chhanv Foundation, which runs the cafe in Agra along with another one in Lucknow, said survivors can often be suicidal and need extensive support that the state has thought little about.

"Beyond treatment, they need counselling, along with education and vocational training, to empower them and take their lives forward," he told The Sunday Times during an interview at the cafe, which employs nine survivors.

Those here like Ms Prajapati and Ms Alvi are fortunate to have the support of their families and an organisation like Chhanv. Many others do not; in 2016 a teenage acid attack victim in the state of Bihar committed suicide by clutching a live electric wire.

A majority of the victims are women from lower socio-economic backgrounds, who are mostly attacked by spurned stalkers or fall victim to family rivalries.

Ms Rukaiya Khatun, 34, another worker at the cafe, distinctly remembers the words the man she had refused to marry hurled at her along with the acid.

"You won't be mine but I will ensure you don't belong to another person," he had said.

For many men, steeped in patriarchy, a woman exercising her right to choose is an affront that is difficult to accept.

Perpetrators of acid attacks are to be punished with a term not less than 10 years but realities can play out differently on the ground. It took Ms Daulat Bi Khan, a 36-year-old Mumbai-based survivor, five years after she was attacked in 2010 to have her perpetrators punished.

Although they were sentenced to 10-year jail terms, they managed to secure bail in just four months, despite a Supreme Court directive that makes acid attacks a non-bailable offence. 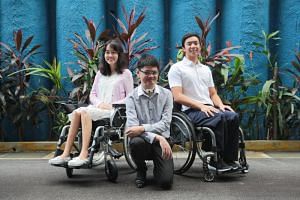 Acid attack left him with a speech impairment, but scholarship recipient wants to be a speech therapist

Facing the future bravely - together

"I suffered a lot of pain. My feet would squirt blood... Yet, I skipped treatment to hire lawyers so that my attackers are punished," she said, her voice still seething with rage over the phone from Mumbai.

"Death is an easy punishment for them. They need to be given life imprisonment without bail so that they pine for the world outside," added Ms Khan, who is the founder and president of the Acid Survivors Saahas Foundation.

Securing the court-mandated compensation too is often difficult, according to her. "It's a lifetime of struggle that is handed out to us. We get pushed around in courts and hospitals," she said, adding that survivors need to be given a government job. "People do not employ us because of the way we look."