NEW DELHI - The initial euphoria in India over its successful cross-border strikes in Pakistan took a grim turn on Wednesday evening (Feb 27) after it was officially confirmed that Pakistan had indeed captured an Indian Air Force (IAF) pilot.

The Indian government confirmed the identity of the captured pilot as Wing Commander Abhinandan Varthaman.

Pakistan's Prime Minister Imran Khan said on Thursday (Feb 28) that he will release the captured pilot on Friday (March 1) as a gesture of peace.

Mr Khan told lawmakers in the country’s Parliament that he hoped the international community would play its part to de-escalate tensions with India, Bloomberg quoted him as saying.

Earlier, the Indian Ministry of External Affairs (MEA) summoned the acting Pakistani high commissioner in India and lodged a strong protest against what it termed Pakistan's "vulgar display of an injured personnel of the Indian Air Force in violation of all norms of International Humanitarian Law and the Geneva Conventions".

Stating that India expects his "immediate and safe return", a statement from the MEA added that Pakistan "would be well advised to ensure that no harm comes to the Indian defence personnel in its custody".

These concerns were raised after a series of videos that emerged from Pakistan on Wednesday showing the captured pilot. In one of these clips, the wing commander is seen being rescued by Pakistani soldiers from local villagers assaulting him. He is later seen with his face injured.

Pakistani newspaper Dawn reported that the pilot, who suffered a back injury, had fired in the air in self-defence and the army convoy carrying him passed through locals who were shouting slogans like "Long Live Pakistan army" and "Long Live Kashmir".

He even jumped into a small pond where he took out some documents and maps from his pockets, some of which he attempted to swallow and some he soaked in water, Dawn reported.

Another video shows him sipping tea and being quizzed by a Pakistan Army personnel. He praises the army representative who saved him from the mob and says: "I would like to put this on record and I will not change my statement if I go back to my country... The Pakistani army has looked after me very well and they are thorough gentlemen." 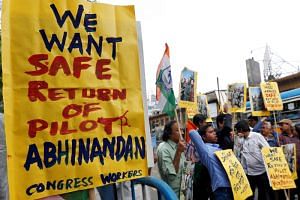 India and Pakistan headed to war? Analysts say the situation is fluid

Mr Varthaman was flying a MiG-21 Bison that is part of IAF's 51 Squadron (also called Sword Arms) based in Srinagar.

According to official sources cited in media reports, he had shot down a Pakistani jet that had crossed the Line of Control (LoC) but his aircraft was struck in the aerial exchange and went down too on the Pakistani side of the LoC.

The display of his pictures and videos has angered many in India, who have termed it as a violation of the Geneva Conventions. Formally adopted in August 1949, the conventions are a set of international treaties that seek to ensure that warring parties conduct themselves humanely with non-combatants such as civilians and medical personnel, as well as prisoners of war and wounded soldiers.

Article 13, for instance, says that "prisoners of war must at all times be protected, particularly against acts of violence or intimidation and against insults and public curiosity". The rules also strictly bar airing pictures of captured prisoners on television.

Indian media have reported that the pilot comes from Tamil Nadu, where his father, retired air marshal Simhakutty Varthaman, is said to live near Chennai. His father reportedly retired as the Air Officer Commanding of the Eastern Command in Shillong in 2012. He has declined to speak to the media about his son.

An excerpt of a programme featuring Mr Varthaman that aired in 2011 on NDTV Good Times, an Indian lifestyle and entertainment channel, has also been dug up. In it, he is asked what the primary requirement for a good fighter pilot is. Mr Varthaman, then a flight lieutenant, says: "Bad attitude."

"The fact that we are fighter pilots means I trust Dusty (his co-pilot) with my life, he trusts me with his and this is blind faith. There is no two ways about it," he adds.

The pilot's capture has brought back memories of the 1999 Kargil War, when another Indian pilot, Flight Lieutenant K. Nachiketa, was captured by Pakistan. He was subjected to physical assault by Pakistani soldiers before a senior officer ordered his men to stop their attacks. Following intense backdoor efforts by the Indian government, he was handed over to the International Committee of the Red Cross and returned home to India eight days later.

In the same war, squadron leader Ajay Ahuja was killed by the enemy in captivity.

Indian Minister of State for Youth Affairs and Sports Rajyavardhan Rathore was one of the first from the government to tweet on Mr Varthaman's capture following the confirmation of his identity.

"As an Air warrior, Wg Cdr Abhinandan Varthaman served the nation by defending it with total disregard to his personal safety. As a nation we pray for his continuous well being and early return," he said on Wednesday evening.

He was joined by a range of opposition leaders who also expressed their support.

"I'm sorry to hear that one of our brave IAF pilots is missing. I hope he will return home soon, unharmed. We stand by our armed forces in these difficult times," tweeted Congress president Rahul Gandhi on Wednesday, before Mr Varthaman's identity was officially confirmed.